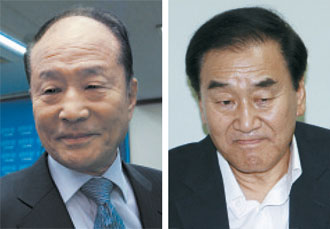 Powerful politicians tied to President Lee Myung-bak are being purged from the ruling Grand National Party.

The interim, emergency leadership of the sinking party, led by presidential frontrunner Park Geun-hye, demanded yesterday key Lee loyalists including the president’s elder brother leave the party and stay away from the April legislative elections.

“Other senior lawmakers and members of the former leadership must also retire,” said Lee, a professor of law at Chung-Ang University.

Another member of the emergency leadership, Kim Chong-in, agreed.

“We must remove all the obstacles to resuscitate the GNP,” Kim said. “This is not just Professor Lee’s personal opinion, but the general consensus inside and outside of the party.”

Lee, tasked to reform the nomination process of the ruling party, did not hesitate to name the president’s elder brother as a main target in the process of the party’s self-reforms.

“Although he already declared he won’t seek re-election over the involvement of his aide in an influence-peddling scandal, Representative Lee Sang-deuk must leave the GNP to allow the prosecution to freely and thoroughly investigate the case,” Lee said.

The first meeting of the emergency council on Tuesday discussed the 76-year-old politician’s exit from the party, but the members did not vote on it to press him, Lee said.

Lee Sang-don also said Representative Lee Jae-oh must abandon seeking re-election in April, urging him to take responsibility for having failed to contribute to the Lee administration’s success. Representative Lee is known as the most influential aide to the president, and was once called a kingmaker for his role in Lee Myung-bak’s presidential victory.

“The starting point of the GNP’s reform is changing its people,” Lee Sang-don said, demanding most senior members of the party retire from the politics. “Just like the resignation of then-Chairman Choe Byung-yul in 2004, the people who were responsible for state affairs and the GNP leadership must leave with honor. Only then will the GNP survive.”

Lee also said members of the former leadership whose slips of the tongue disgraced the ruling party should stay away from the party. “Those whose remarks made the GNP a subject of public ridicule must be held accountable,” he said.

Senior politicians from Gyeongsang were also asked to retire from the political frontline to make room for fresh blood. “Lawmakers with obsolete ideas who have safe havens in Gyeongsang and do nothing but praise Park Geun-hye, or those with forgotten existences, must seriously ask themselves what is the true way of helping her,” Lee said.

“The party cannot nominate such people again and ask voters to support them,” he said. “They must voluntarily step down so that we can recruit fresh, talented faces from outside.”

Another member of the emergency council, Representative Joo Kwang-deok, also agreed with Lee’s ideas. “We should be ready to do anything and everything for reform,” he said.

Concerns grew from Lee Myung-bak loyalists about a possible purge.

“It is human nature that those with power want to brandish the sword,” a key aide to Representative Lee Jae-oh said. “Since it is just an idea of Professor Lee, we should wait and see how the nominations are made.”

The pressure on the president’s older brother to leave the GNP was flatly rejected by an aide to Representative Lee Sang-deuk.

Drastic measures to distance the GNP from the president were foreseen after Park recruited critics of Lee to join the party’s emergency leadership. The Blue House was tight-lipped about the reforms.