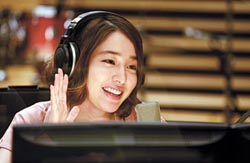 In her heyday, Jin-ah (Lee Min-jeong) was a popular singer, but all she has left now is her manager (Lee Gwang-soo) and her job as a radio disc jockey for “Wonderful Radio,” a program that is on the verge of being discontinued. Fiery and outspoken, Jin-ah is an unrestrained DJ, saying all she wants to say on air and changing song requests at whim.

One day, the station brings in a new producer, Jae-hyuk (Lee Jeong-jin), as a last attempt to raise the program’s dismally low ratings. He wants to revamp “Wonderful Radio,” while Jin-ah suggests they instead add a new segment in which listeners share their life stories and favorite songs on air.

To her disappointment, the first broadcast is a wreck, but the program soon begins to take off as one listener’s heartwarming story encourages more listeners to tune in.

The film’s scenario was written by Lee Jae-ik, producer of SBS Power FM’s “Cultwo Show,” who has incorporated his own experiences in the movie, thereby giving viewers a realistic glimpse at the behind-the-scenes processes of a radio program. 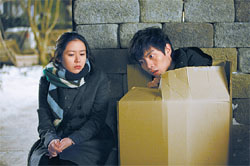 “I see dead people” is a common phrase used in parody, but if it were true, as it is for the leading lady in “Spellbound,” it would be a shockingly terrifying trait to hold.

Ever since she was young, Yeo-ri (Son Ye-jin), has had the unnatural ability to see ghosts, and when they do appear, usually when she has company, unexpected things occur to the people around her. Yeo-ri chooses to isolate herself from the outside world but is approached by a street magician named Jo-goo (Lee Min-ki), who offers her a job in his show.

One year passes, and Yeo-ri ends up playing a part in the magician’s horror-themed act, in which she plays a ghost in a closet. Every day, Jo-goo’s staff successfully close the show and invite Yeo-ri for drinks, but she always rejects their offer.

She is fully aware what will happen if she gets close to people.

When eventually Yeo-ri opens up to Jo-goo about her tragic and lonely life, things start to change for the both of them. Can Jo-Goo help her find a way out? Or will he be chased away by the ghosts like all of the other people in Yeo-ri’s life?

In “The Skin I Live In,” Pedro Almodovar throws sex, romance, violence, tragedy and psychosis into one big blender and gets ? expectedly ? a brain-twister plot but ? perhaps more surprisingly ? a film that pushes all kinds of boundaries in exactly the right way and is worthy of critical acclaim. This is not a film for a causal evening at the theater but rather one to watch before some serious reflection on issues like rape, medical ethics and the boundaries of sexual identity.

Dr. Robert Ledgard (Antonio Banderas) is a crazed but exceptionally talented plastic surgeon who went off the deep end when his wife killed herself after being severely disfigured in a car accident. The doctor spends hours on end at his gorgeous estate ? which doubles as a laboratory and operating room ? using whatever means he can to try and develop a skin that will not burn, brushing aside all ethical considerations, of course.

Over the objections of his housekeeper Marilia (Marisa Paredes), who is obviously a motherly figure in some sense, Ledgard develops feelings for his patient, Vera Cruz (Elena Anaya), a stunningly attractive woman who he keeps captive and closely monitors by video camera.

But the relationships between the characters are much more complicated than they originally appear.

Using a story filled with violence and suspense, Almodovar reveals twists and turns that are impossible to predict but will simply blow your mind. In a story that will make you question your very basic assumptions about human relationships, he shows exactly what people are capable of after suffering great losses in their lives.

Naaaants igonyamaaaa bagithi baba. Most adults today would recognize these Swahili words when sung loudly with the right intonation. Try it next time you’re in a noisy bar. But it’s safe to generalize today’s movie-going tots as unfamiliar with Elton John’s anthemic sound track. Thus is the circle of life.

But “The Lion King” seems to have sustained its franchise through a number of reincarnations.

From VHS to DVD special editions to a sell-out Broadway musical, Simba’s coming-of-age adventure has remained in the spotlight.

And for the first time, the Disney film will be available in 3-D.

After Mufasa, the Great King of the Pride Lands, falls victim to his jealous brother Scar’s coup d’etat, Simba, along with his pals Timon and Pumbaa, must reclaim the Kingdom.

The tale of a young heir struggling to overcome power struggles and legitimize his place on the throne is a familiar story on the Korean Peninsula. “The Lion King” offers a message we should all take to heart: “Hakuna Matata.” 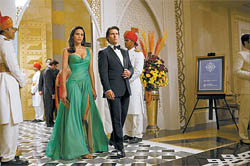 Tom Cruise returns as Ethan Hunt in the fourth installment of the Mission Impossible series.

This time the IMF have been disavowed and that means that Crusie et al. are denied access to the myriad gadgets and gizmos they would normally use. And what they do have doesn’t always work. This is “Mission: Impossible” stripped down, defunded and reduced to surviving on what they have available when Ghost Protocol is initiated.

Hunt’s IMF is shut down when it is suspected of bombing the Kremlin and Hunt, Beji Dunn (Simon Pegg) and Jane Carter (Paula Patton) must go rogue in order to clear their name and, of course, prevent the end of the world.

The film has the prerequisite action scenes which sees Hunt scaling the outside of the Burj Khalifa in Dubai, United Arab Emirates, currently the tallest structure in the world.

Director Brad Bird makes his live-action directorial debut with the film, having previously directed a string of animated features.

Somewhat unbelievably, it has been 15 years since Cruise launched the franchise, and this one is just as good, containing all the elements fans of “Mission: Impossible” have come to expect.