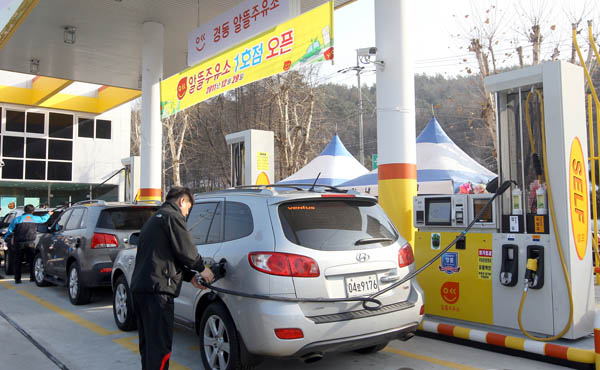 A customer fills up his car at the first ‘altteul’ gas station that opened in Yongin, Gyeonggi, yesterday. Cars lined up to take advantage of the discounted prices of gasoline and diesel oil. [NEWSIS]


The first of a series of gas stations designed to provide oil products at low prices opened for the first time in Yongin, Gyeonggi yesterday.

The so-called “altteul,” or thrifty, filling station was launched to great fanfare with government officials attending an opening ceremony. It remains to be seen whether the advent of the budget station will help lower prices of oil products, including gasoline and diesel, across the board in the country. The station is part of a broader government effort to fight inflation.

The Ministry of Knowledge Economy stressed that the gas station is now able to sell gasoline at 60 won (5 cents) to 100 won cheaper per liter than its rivals. As a way of lowering prices, the National Agricultural Cooperative Federation and Korea National Oil Corporation will purchase large quantities of gasoline from local refiners and supply this to the altteul stations.

The new station, which is located in Mapyeong-dong in Cheoin district, is selling gasoline for 1,843 won per liter, and diesel oil for 1,694 won per liter. This compares to the district’s average of 1,944 won and 1,793 won, respectively.

Kyungdong, which mainly produces coal, opened the gas station to diversify its business away from its traditional reliance on the declining coal industry. In return for participating, it said the station will be allowed to provide electricity charging services as well. Kyungdong said it will open 10 altteul gas stations nationwide, including in Gyeongju, Busan and Gangwon. Its chairman said it anticipates no problems in offering the discount.