Employees of the Korea Exchange celebrate the closing of this year’s stock trading at their office in Yeouido, western Seoul, Thursday. The Seoul bourse, which started above 2,000 at the beginning of the year, ended slightly above 1,800. [YONHAP]


The sun is setting on 2011, which will be remembered as a year of unexpected economic turbulence.

While there were landmark achievements such as the ratification of the long delayed free trade agreement with the U.S. and Korea becoming the ninth country in the world to break the $1 trillion mark in trade, there was concurrent negative news such as worsening wages, record breaking household debt and inflationary pressures.

Here’s a look back on what happened to Korea macroeconomically and financially in 2011.

Optimism at the start

At the beginning of the year, there was a high degree of confidence that the strong economic momentum of 2010 would continue throughout the year.

Although the current account balance surplus was below $1 billion for the second consecutive month in January, it wasn’t because exports were slowing down but because imports rose on high expectations of strong economic growth.

Many brokerage firms had rosy forecasts that if the bully rally was undisturbed, the Kospi would likely close between 2,250 and 2,700 by the end of the year.

The government was optimistic that the Korean economy would achieve 5 percent growth, following the 6.2 percent growth posted in 2010.

The central bank was a little more conservative, predicting growth of 4.5 percent.

But as the year progressed, unexpected turns of events started to cloud the market. The anti-dictatorship movement in the Middle East started to affect the local economy as commodity prices started rising. The stock market was rattled when an earthquake and tsunami occurred in Japan, hurting parts suppliers and buyers here.

In August, due to gridlock in the U.S. Congress, the U.S. credit rating was downgraded for the first time in history, and the Korean stock market plunged. And in just two months, the Seoul bourse retreated to as low as 1,600 as the European sovereign debt crisis deepened.

The severe fluctuations on the stock market once again raised concerns about the vulnerability of the Korean market to fickle foreign investors.

Foreign investors unloaded local stocks en masse when the European crisis deepened. Throughout this year, they dumped 9.5 trillion won ($8.25 billion) worth of stocks.

This month, a new risk emerged with the unexpected death of North Korean leader Kim Jong-il. Although Kim’s death didn’t panic the local bourse, the emergence of a new depth of geopolitical risk from North Korea has kept investors from being bolder in their trades.

Since that news broke, investors have mostly been sitting on the sidelines watching the situation cautiously.

“The stock market in the beginning showed signs of normalization following the global economic crisis of late 2008 and was on a continuous upward path,” said Han Chi-hwan, an analyst at Daewoo Securities. “However, as it dropped by roughly 10 percent, it closed this year without recovering its lost ground.” 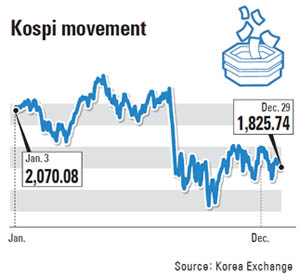 Although concerns of a global recession started to cloud the economic outlook in the second half and export growth started slowing, Korea became the world’s ninth country to see its trade reach above $1 trillion.

This was an exceptional milestone considering Korea barely had any exports after the Korean War in the early 1950s and that its trade volume was only $1.3 billion in 1967.

Another milestone achieved this year was the ratification of the free trade agreement with the U.S.

The FTA with the U.S. that sat in both legislatures for four years since the initial agreement moved swiftly.

The U.S. Congress passed the bill minutes before President Lee Myung-bak visited Washington, and the Korean National Assembly passed it despite one opponent opening a tear gas container in the main chamber.

With the ratification, Korea became the first country in the world to have free trade deals with three major economic blocs: the U.S., EU and Asean.

Closer to the ground however, the economy looked a little worse for the average household at the end of the year than at the beginning.

The government and the central bank earlier this year maintained a loose monetary policy. The central bank raised the key borrowing rate in January, March and June, and it is now at 3.25 percent. However, as the euro zone debt crisis spun out of control and uncertainties started to dampen the global market, the central bank was cautious about raising it again. As a result, inflation went up above 5 percent in August.

The government swiftly moved to tame it but with scant results.

The government revised the Consumer Price Index, changing the items included in it, and the figure was lower as a result. Yet by the end of this year, inflation was still above the government’s target of 4 percent.

The jeonse (key money) price as of November was estimated to have soared more than 12 percent from the start of the year. This is the sharpest increase since 2001, when they rose 16 percent. While consumer prices and rents show no signs of falling, total household debt broke a new record, edging close to 900 trillion won by the end of the third quarter.

One of the biggest problems with household debt is that in the latter half of the year, most of the loans turned out to have been taken for living expenses as prices continued to rise. These loans were taken out by low-income families, which contradicted the government’s earlier assertion that most loans are taken by relatively rich people, and therefore the risk of default was low.

“The year 2011 was one of numerous ups and downs,” said Oh Seung-hoon, a strategist at Daishin Securities. “There were a lot more unfortunate events than good news, and a feeling of heaviness still remains as we are entering 2012.”