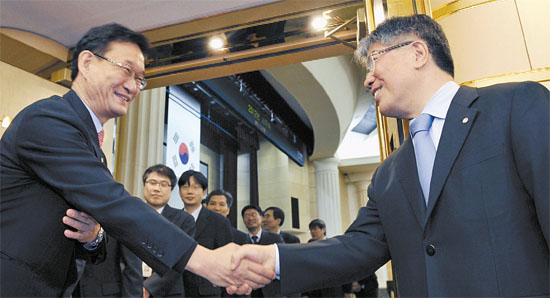 Bank of Korea Governor Kim Choong-soo, right, shakes hands with a BOK employee at a ceremony marking the start of the business year at the central bank’s headquarters in Jung District, central Seoul, yesterday. [NEWSIS]


Korea’s financial companies are hunkering down into “crisis mode” this year as indicators of an economic slowdown and uncertain financial markets sparked by the fiscal mess in Europe sets alarm bells ringing.

Heads of domestic commercial banks are proving quite vocal in stressing the importance of risk management in their New Year’s addresses, echoing the kind of sentiments seen after the Lehman Brothers-inspired meltdown in 2008.

On the other hand, heads of major financial groups are invoking another maxim and seeing opportunities amid the unfolding or predicted chaos as they chase group-wide efforts toward sustainable growth despite the unpredictable environment.

Meanwhile, the Ministry of Strategy and Finance, the Financial Supervisory Service and other financial agencies are promising to bolster their contingency plans and institute preemptive countermeasures to the expected instability.

Korea’s purchasing manager’s index (PMI) recorded its sharpest decline in December since the fallout of the 2008 financial crisis in February 2009. In the presence of such indicators, local firms are bracing for yet another rocky year in 2012.

Similar trepidation has been coursing through the annual New Year’s addresses of domestic commercial banks, with CEOs yesterday focusing on risk management.

“First, we need to try to go back to basics and review our capabilities,” said Min Byung-duk , the CEO of Kookmin Bank. “The importance of risk management cannot be overemphasized this year, when financial uncertainty will rise and an economic downturn is expected.”

Such sentiments were shared by the CEO of Woori Bank, Lee Soon-woo, who said that, “We need to be devoted to the basics [...] this year. We will fundamentally transform the problem of capital soundness that has been plaguing us.”

The calls for prudent management in many ways mirrored the content of the rallying speeches made this time two years ago in the wake of the global credit crunch, when local financial companies were thrown into turmoil. At the time, Kang Chung-won, then-CEO of Kookmin Bank, made a point of underscoring the need for “preemptive risk management across the board.”

However, the heads of financial holding companies, which own these banks, are keeping their eyes on long-term goals like sustainability.

“We need to strengthen our platform for stable, sustainable growth,” said Euh Yoon-dae, chairman of KB Financial Group. “We also require stronger capital adequacy functions as well as a comprehensive way of responding both preemptively and efficiently to regulatory change.”

Shinhan Financial Group Chairman Han Dong-woo said yesterday that flexibility would be a key to success in the Year of the Dragon.

“When low growth and uncertainty persists, it is crucial that we have the capability to turn crisis into opportunity by bolstering operational soundness and our ability to respond to change,” he said.

“The demand that financial companies act in an ethically responsible way derives from how increasing economic polarity has emerged as a pressing social concern,” he said. “We plan to take this to the next level, where we still pursue profit but do so while paying close attention to a range of social issues.”

“Banks are likely to see their main borrowers, such as small and midsized enterprises (SMEs) and households, face more credit risk this year, and this could also be the case for marginal borrowers and unstable fields such as construction or real estate,” he said. “So we need to clean up our assets at all costs.”

Finance Minister Bahk Jae-wan noted the need to guard against populist campaign pledges that could crop up, as well as possible shocks from the euro zone. “We need to shore up our funds in the event that economic conditions become very challenging,” he said, calling for ministry officials to become “guards” at parliamentary committees to revise or block bills that run counter to this spirit.