Foreign firms not sold on idea of listing in Korea

Foreign firms not sold on idea of listing in Korea 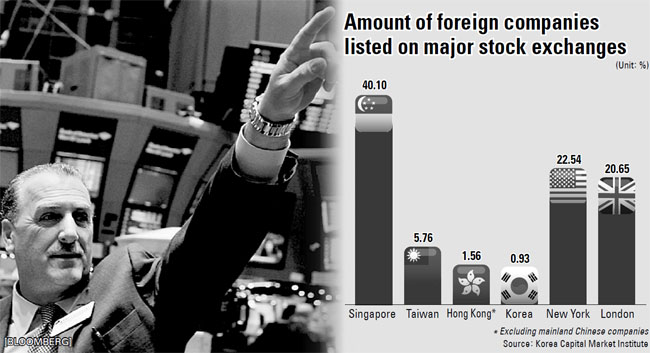 In one respect at least, Korea remains light years behind prominent Asian stock exchanges as foreigners make up less than 1 percent of listed companies here.

And while Singapore, Hong Kong and Shanghai move to exploit their clear edge in attracting blue chips from overseas, the Korea Exchange has been unable to overcome a number of handicaps.

These include language barriers, undervalued companies and restrictive regulations - all of which still stand as roadblocks to the administration’s noted goal of transforming the nation into an Asian financial hub.

Out of some 1,822 companies listed on the benchmark Kospi and secondary Kosdaq markets at the end of last year, just 17 companies or 0.93 percent were foreign firms that had listed on the Korean bourse, according to data from local bourse operator Korea Exchange.

Starting with two companies in 2007, a total of 19 foreign companies have listed on the Korean stock exchanges over the last five years.

However, Hong Kong-based camera module maker Cowell e Holdings voluntarily delisted due to undervalued stocks, and Japanese online content provider Nepro IT was forcibly delisted due to charges of embezzlement.

Of the remaining companies, 15 are from China, one is based in the U.S. and another in Laos.

Meanwhile, China Gaoxian Fibre Fabric Holdings is in danger of delisting due to questions regarding its accounting practices.

Such a record pales in comparison to other Asian bourses, namely the stock exchanges of Singapore and Taiwan, where 40.1 percent and 5.8 percent of listed companies were foreign companies as of last November, respectively.

Mean while, the Shanghai Stock Exchange has completed preparations for a new stock market for foreign firms to attract leading global blue chips.

Although the Korea Exchange hopes to attract six or seven large foreign companies to list this year after it approached U.S. automaker General Motors last year, the bourse operator is struggling with a range of factors unique to Korea’s capital market.

“In order to attract initial public offerings, valuations of companies have to be high,” said Lee In-hyung, the head of capital market research at the Korea Capital Market Institute.

“However, the geographical risk inherent in the Korean bourse causes companies to become undervalued,”

“There is no particular benefit to listing on the Korean bourse,” said one local brokerage official in charge of foreign IPOs.

“Not only are firms undervalued compared to stock exchanges in other nations, but regulations such as the one requiring the book runner [main underwriter] to invest 10 percent of the IPO are too restrictive.”