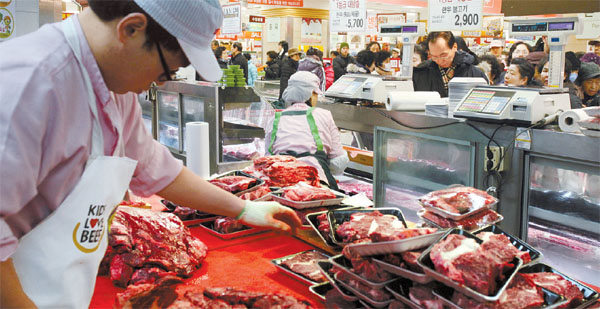 
Farmers are shedding tears and raising angry voices about the plummeting prices of their hanwoo cattle, but beef eaters haven’t seen prices drop much at all.

“I heard that the beef prices for producers dropped sharply recently but consumers like me can’t really feel the difference,” said Lee Myung-ja, a 55-year-old housewife who went out with her family for a hanwoo, or high-end Korean beef, dinner earlier this week.

The menu price hadn’t budged. Lee ended up paying 33,000 won ($28) for 200 grams of marbled rib-eye, which she remembers as being the same price as two years ago.

Distribution costs are estimated to account for 20 to 30 percent of retail beef prices. The distribution network involves a minimum of five stages, including dealerships, butcheries and wholesalers before consumers purchase beef at a local butcher or supermarket. In some cases the distribution process has seven stages.

Profits are taken at all levels, and each tier decides on its own how to react to market changes.

According to the National Agricultural Cooperative Federation, the price of a steer from farm to auction dropped 47.4 percent from 5.85 million won in January 2010 to 3.08 million won as of Tuesday.

An oversupply has caused the price of live cattle to drop.

Retailers say it’s unfair for them to get hit with criticism that they’re gouging customers. They say the foot-and-mouth disease outbreak last year was one factor in keeping the hanwoo price relatively high.

“For six months from November 2010, we had to take a risk of falling demand when foot-and-mouth disease broke out,” said an official from Lotte Mart. “The price of such risk is reflected in the consumer price.”

“Unless the distribution process becomes less complicated, consumers will be charged with a high price for hanwoo even though farmers receive less for their cows,” said an industry official.

Due to the falling prices, livestock farmers have started giving up raising cattle because the profit margins are disappearing.

According to a report released by Statistics Korea yesterday, a total of 11,000 stock farmers gave up raising cattle last year due to falling prices and increasing feed costs due to rising international grain prices. The number of farmers raising cattle dropped from 178,000 in 2010 to 169,000 last year.

A majority of the farmers who gave up were those with a small farm, raising only one or two cows.

One of the biggest reasons for farmers giving up is because they expect beef prices to fall sharply once the Korea-United States free trade agreement takes effect as early as the first half of this year.

The Korus FTA was ratified by the two governments last year and will go into effect after documentation work is completed. When the Korean government decided to resume imports of U.S. beef in 2008, the average price of live hanwoo plunged. At the time, the government expected the market share of local beef to drop by 5 to 10 percent.

Additionally, the government is being blamed for its policy of financially supporting farmers to raise cattle to make up for the losses after it slaughtered cows when foot-and-mouth disease spread.

Consumers have partly contributed to the falling prices for local beef by turning to other cheaper meats or cheaper imported beef.

Consumers have been tightening their wallets due to a slowing economy and high inflation.

“As part of a solution, the distribution system should be simplified,” said an official from the Hanwoo Association. “There should be more butcher shops that bring meat directly from the farms for consumers to purchase, like the Korea Federation of Livestock. This will lower the consumer price of hanwoo since there will be less money give to middlemen.”