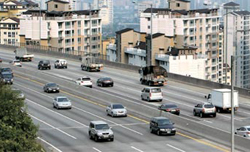 The total number of registered vehicles in the country rose to a new high last year as the number of people purchasing new vehicles also climbed to a 10-year high, the government said yesterday.

Registered vehicles grew 2.8 percent on-year to just over 18.43 million, with nearly 1.6 million new cars purchased in 2011, according to the Ministry of Land, Transport and Maritime Affairs.

“The number of new vehicle registrations rose 4.7 percent on-year, while the number of write-offs also hit a record high last year,” the ministry said in a press release.

“Such a large increase in the number of write-offs is partly due to the growing demand for new vehicles, especially as all the cars registered during the country’s great automobile boom in the 1990s are aging fast.”

The ministry said the number of used cars being shipped overseas was also rising steadily, further pushing up the number of vehicle write-offs here.

Passenger vehicles accounted for 76.7 percent of all vehicles in the country, with 14.13 million cars registered at the end of last year.

There were 3.22 million cargo trucks, making up 17.5 percent of the total.