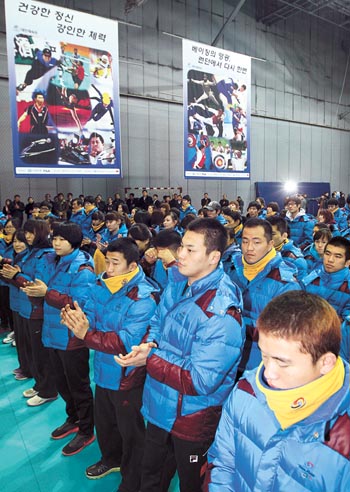 With only 200 days left until the start of the London Games, the Korean Olympic squad attended a ceremony marking the official start of training, with athletes promising a strong performance in the upcoming international event.

More than 400 players and coaches gathered at the Korea Olympic Committee’s kickoff ceremony at the National Training Center in Taeneung, Gongneung-dong, northern Seoul.

Choe Kwang-shik, the minister of culture, sports and tourism; Park Yong-sung, the president of the KOC; and Park Jong-gil, head of the National Traning Center, delivered messages to athletes.

“Sports are honest as the result comes from how much you sweat and devote your passion in your usual training session,” Choe said. “In London, we hope to see the fruit of your efforts.”

The Olympics begin on July 27 and wrap up on Aug. 12. Korea, looking for its third consecutive top-10 cumulative finish, hopes to send its athletes to all 26 events in London. The officials expect gold medals from taekwondo, archery, judo, shooting, badminton, fencing, swimming and artistic gymnastics.

Park yesterday clearly defined the KOC’s goal of sending 250 athletes to the quadrennial event. So far, 106 athletes have qualified for the Summer Games.

“Our urgent priority is to earn as many passes as possible in the remaining Olympic qualifiers,” Park said in his speech.

“To meet the support of our people, we expect more than 10 gold medals and top-10 finishes. Let’s make Korean sports stand at the center of the world again.”

Male archer Kim Woo-jin and female judoka Hwang Ye-seul stepped up as athlete representatives to take an oath to devote themselves in rigorous training and preparation.

“After taking the oath on behalf of the other athletes, I’ve become more determined,” Kim said to Yonhap News Agency.

“I will have to shoot good scores in the trials in March to join the Olympic team. I am nervous but excited at the same time.”

Korea is widely regarded as the dominant country in archery, but no man has won the gold in a singles competition at the Olympics. Kim, who won two gold medals in singles and team events at the 2010 Guangzhou Asian Games and 2011 World Archery Championships, emphasized that he would like to become the first Korean male archer to do so.

Although the National Training Center has been an iconic location for national athletes’ preparations, many will also train at a training center in Jincheon, North Chungcheong.

In fact, the Korea Swimming Federation announced on Sunday that its national team members have already begun intensive training for the Olympics at the Jincheon training center.

The newest training center was opened last October to provide more optimal training facilities as the existing facilities in Seoul have grown out-of-date after 45 years in operation.

The KOC had been looking for new site since the royal tombs of the Joseon Dynasty (1392-1910) near the Taeneung training center prevented its expansion. Construction began in February 2009 at a cost of 184 billion won ($162.7 million).

The final stage of construction of the Jincheon site is expected to be completed by 2017 at a cost of 330.8 billion won, according to the KOC.

When complete, the Jincheon center is expected to become a world-class training camp that accommodates most of the country’s national team members across 37 events, except for skaters who will continue to use the Taeneung center and about 200 others athletes who have their own specially equipped facilities.

For the first time, Korea’s Olympic athletes will be able to practice with similar facilities in London as the KOC has signed a lease contract with Brunel University in West London to set up a camp, similar to the National Training Center during the Summer Games like.

The camp will feature training facilities, restaurants and medical centers.