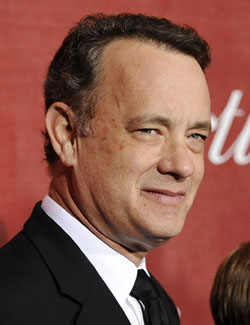 “Electric City,” an animated futuristic series Hanks has been developing for years, will premiere on Yahoo this spring. The series includes 20 episodes, each three- or four-minutes long.

For Hanks, the release of “Electric City” caps the actor’s efforts to find the right avenue for the project. He first tried to make the series using puppets. He earlier announced it would be released in early 2011.

The series is set in a seemingly peaceful city situated in a post-apocalyptic world. Many of its themes are socially conscious topics relevant to today, including energy consumption.

“It was always our intent to have this project live and breathe online, and we felt Yahoo would be the perfect home,” said Gary Goetzman, co-founder of Playtone, Hanks’ production company.

For Yahoo, “Electric City” is its first entry into scripted original programming. Yahoo has been beefing up its online video with reality series and wrap-up news shows, many of which rank among the most-viewed series online.

“Electric City” will be distributed online and through tablet devices with the usual interactivity and social media connections but also a few new features. Most notably, it will be available in several languages, including Spanish and French. Along with producing, Hanks will voice a character.

“On the surface, the Electric City is utopia and under the surface, Electric City is secrets and heavy-handed state control,” says Erin McPherson, vice president and head of original programming at Yahoo. “What we found really compelling is that this is perfect for a highly digital audience, a lean-forward audience who likes to utilize the medium of the Internet.”

In October, Yahoo launched a slate of programming targeted at women. It’s planning another batch of programming for February that will focus on comedy, including partnerships with Bill Maher and the Funny or Die Web site.