Stepping from behind the curtain, Park stars in musical

Stepping from behind the curtain, Park stars in musical 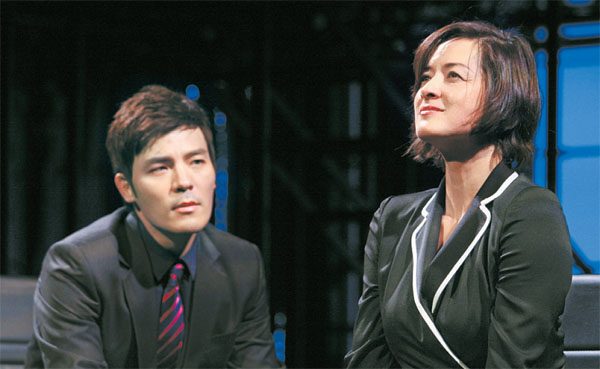 Director-turned-actor Kolleen Park, right, talks to a psychiatrist, played by Choi Su-hyeong, during a performance of the musical “Next to Normal” at the Doosan Art Center Yonkang Hall in Jung District, central Seoul. Provided by Musical Heaven


Pulling the strings behind the scenes, directors of theatrical performances seldom find themselves in the spotlight. As the actors bow to thunderous approbation, those on the production side of the show are generally out of sight.

But for Kolleen Park, the famed director of the musical “Aida,” confinement behind the curtain is over. Her talents will be on full display in the ongoing musical “Next to Normal,” in which she stars as Diana, a bipolar mother dealing with persistent hallucinations of her deceased infant son.

It is refreshing to see Park on the stage. She was praised by local media in 2010 when features described her as a heartwarming leader able to create inspiring sounds from a choir of celebrities - part of KBS’s “Qualification of Men” reality TV show.

Her success conducting the celebrities further launched Park’s theatrical career, helping her become a respected figure and talented musical mind in Korea. Not long after the show, she was named director of the musical “Aida” and last year worked as the musical director of “Rent.”

Criticisms of excessive appraisal of Park’s role in the reality TV show are debunked by “Next to Normal.” The director-turned-actor took on a challenging role for her first onstage performance. The family of three is pushed to its limits, with Diana struggling psychologically throughout the show. Her fists clenched and eyes full of rage, Diana desperately fights her husband and teenage daughter who deny the existence of the grown-up son she has created in her head.

Park performs the role well. Her distraught appearance - tangled hair, bloodshot eyes - evolves naturally during the show. Her character remains stubborn, refusing to accept the help of those close to her who deny her visions. She screams, she cries, she begs.

Park is so convincing on stage that even at the curtain call, she still resembles Diana. Her body still shakes. She looks into the audience as if she’s still searching for her son amongst those standing and cheering.

Director-turned-actor Kollen Park proves that she can bring her emotions to the surface.

Aside from Park’s raw talent, the musical has drawn audiences for its strong and relatable message. The critically acclaimed play debuted Off-Broadway in 2008 and is now being performed in 11 countries. It captures the extreme hardships families can face, showing how unexpected turns in life can bring about seemingly insurmountable obstacles.

Each family member’s actions have significant effects. As Diana’s hallucinations about her son deepen, her daughter becomes more violent and rebellious while she desperately desires her mother’s attention and affection.

When Diana hits rock-bottom and is persuaded to get electroconvulsive therapy, her daughter’s misconducts also reach new extremes. She drinks alcohol and ingests her mother’s drugs.

Although it seems as though nothing can assuage the family’s horrors, one sentence changes the daughter’s attitude: “I love you.”

Just as the title of the performance suggests, it’s okay to not be completely normal, but to rather stay next to normal.