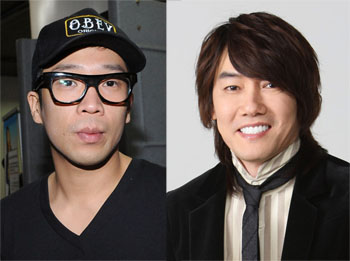 Ever the political and social activist, entertainer Kim Jang-hoon has taken up another cause for when he isn’t busy championing the rights of the Dokdo islets and the so-called “comfort women.” This time, Kim has taken up funding the holiday of fellow entertainer MC Mong, who Kim suspects is suffering from depression.

On Jan. 11, Kim used his personal Web site to announce that he had paid for a trip to the United States for MC Mong.

“I was worried for his welfare in case he is at risk of killing himself,” Kim said. “For the last year he has spent his time hidden away in his home or at the studio, subject to public ridicule when he stepped outside. I see signs of depression and panic disorder in the guy… I felt like he really needed the break, so I sent him off.”

On an extra-long post that began with the singer pondering life and death and what it means to be a public figure, Kim maintained a neutral front as he mentioned in parts about the dilemma that MC Mong was in with regard to his military service. It was alleged that the star pulled out 12 teeth to defer his enlistment six times.

Last year, the Seoul Central District Court sentenced MC Mong to six-month prison sentence, suspdende for one year charge that he had intentionally pulled out his healthy teeth just to be exempted from military duty. He was eventually acquitted of the charge.