The resurgence of traditional homes

The resurgence of traditional homes 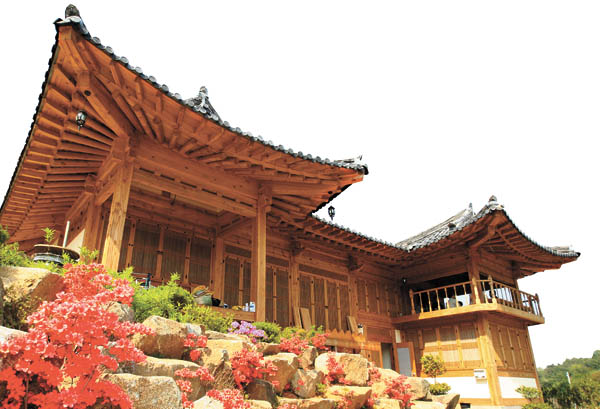 
While high-rise luxurious apartments like the Samsung Tower Palace in Dogok-dong, southern Seoul, were considered fashionable from 2004 until recently, hanok, traditional Korean houses, have emerged as the latest buzzword among Korea’s lifestyle trendsetters.

The prices of hanok in Gahoe-dong, northern Seoul, where dozens of the traditional homes have survived, have nearly doubled in the past half-decade, while hanok villages targeting tourists from home and abroad have become ubiquitous, sprouting from Gyeongju, North Gyeongsang, to Incheon.

Some municipal governments are even encouraging their residents to build more hanok, providing subsidies and low-interest, long-term loans.

The wave of postwar industrialization tore down a large number of hanok as people preferred concrete, slate and steel on the ground. Both rural and urban landscapes underwent major transformations during the rebuilding process, and Koreans have only recently revisited the traditional values of hanok (Korean homes are thought to help cure atopic diseases and asthma due to natural materials and high-quality ventilation).

The following are answers to questions readers may have about traditional Korean homes. The responses are based on reports provided by experts on the origins and structures of hanok.


Q. What is the history of hanok?

A. The Paleolithic men on the Korean Peninsula lived in caves or built houses with random structures with boughs, leaves and leathers. During the Neolithic Age, the house evolved into a dugout hut. They dug the ground shallowly, erected pillars sporadically, placed rafters on them and covered the roof with grass and straw thatches. During the following Bronze Age, men widened the size of the house by setting up additional pillars inside the house. But theses structures were easily flooded when it rained since they were located semi-underground.

In the Iron Age, houses with roofs consisting of tiles, or giwa in Korean, emerged - a form that is closest to modern hanok. The pillars and beams were made of wood, while the roof was topped with tiles. The walls had wooden props inside and were covered with red clay mixed with straw.

The floors were then covered with hanji, or paper made of mulberry trees, and layers of soybean oil on the paper made them shine and effectively waterproof. The house was also equipped with ondol, an underfloor heating system, during the Iron Age.

Traditional hanok include bedrooms, a kitchen, a living room, a barn, a bathroom, a yard, a platform for crocks of sauces and condiments, a fence and a gate. Depending on the social status of the owner, those elements are arranged differently. A hanok complex belonging to an owner from the upper class had several buildings inside and assigned them to residents according to gender, age and social standing. Owners used the main building while farmhands and maids occupied the buildings closest to the gate so that they could greet guests as soon as possible.

The room arrangements also differed according to geography. Houses in the northern part of the country had rooms assigned shaped like digeut or mieum (Hangul characters) to contain the heat. Those houses also had lower roofs for the same reason.

In the south, rooms were arranged in one line, while regions in the middle of the peninsula had rooms arranged like giyeok. Compared with Western-style houses, hanok have a larger number of doors and windows. They were not simply meant for better ventilation - Koreans of the day considered windows as frames that facilitate appreciation of the landscape surrounding the house.

The Korean people at the time considered a location with mountains at the back and water or fields at the front most ideal. They preferred houses facing southeast because the Korean Peninsula has wind blowing from the southeast in summer and from the northwest in the winter.

How does ondol operate?

Ondol, literally meaning “warm stone,” has stones installed under the floor. When a house was built, a ditch was dug below the floor and covered with flat stones, called gudeul. When the furnace was lit, the heat and smoke passed through the gudeul to deliver the heat.

The floor of the room was not evenly warm, though. The part located closer to the furnace was warmer. That is why Koreans in old days used to keep their head near the furnace when sleeping. There is a traditional saying that it is good for your health when your head is warm and your feet are cold.

The biggest downside of hanok is that residents often felt cold during winter due largely to the many windows and doors. The noise is hardly blocked either so those who want their privacy protected feel uncomfortable within the house. Also, the basic material - wood - made hanok vulnerable to fires. Its construction requires more workers than for buildings made of concrete or bricks. It also costs more to build hanok.

How are modern hanok different?

Modern hanok have a stand-up kitchen and a flushable toilet. Windows and doors have double layers and most of the living rooms have sliding glass windows to keep off the cold.