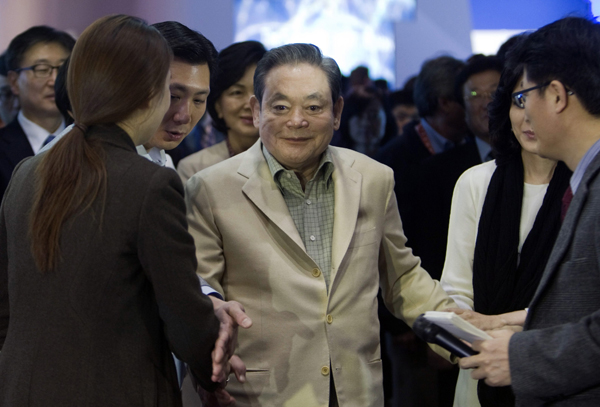 LAS VEGAS - Samsung Electronics Chairman Lee Kun-hee called on the company’s presidents to be more imaginative and creative during a meeting at the Consumer Electronics Show that ended on Friday in Las Vegas, he told reporters late last week.

“I asked them to give more thoughts to the future, and to move forward strongly with more imagination and creativity,” he said on Thursday.

“We need to face the future head-on, look further and perfect our technology.”

The technologies and products on display at CES often generate a lot of buzz in the IT industry for the rest of the year. As such, technology professionals, critics and fans worldwide keep a close eye on the event.

As for his thoughts on the show, he said that “if companies don’t work hard to stay relevant, it will just be a matter of time before they become history.”

When asked which Samsung products at the show could lead the industry, he said, “There are some [such products], like our smart TVs and Galaxy smartphones, but we shouldn’t become complacent due to these achievements. We need wider and richer product lines.”

Lee also commented on the rise of Chinese rivals and the sinking trajectory of Japanese counterparts in the global IT scene.

Like his father Lee Byung-chull, the current chairman studied at Waseda University in Japan and is close to many business tycoons there. His father founded the Samsung empire and passed away a quarter of a century ago.

“Japanese companies, who raced so far ahead of their rivals in the past, seem to have run out of steam,” he said.

“But their Chinese counterparts appear to be catching up fast, although it will be a while before they are neck and neck with Korean companies.”

Lee was accompanied on his Las Vegas trip by his wife Hong Ra-hee, who serves as a director at Leeum, the Samsung Museum of Art, and his three children, who are all in managerial positions at Samsung affiliates.

Lee said he will consider increasing their roles in the group’s management at a later date.

“They are studying hard at the moment,” he said. “I will decide after seeing how they do.”

All three offspring were promoted in an annual management reshuffle that took place in December 2010.