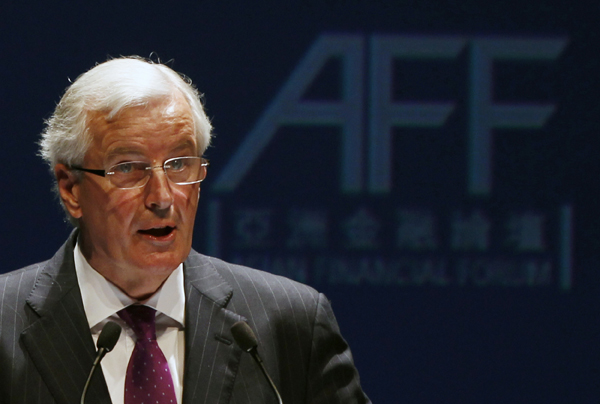 At the fifth Asian Financial Forum that kicked off in Hong Kong yesterday, Barnier urged credit rating agencies to take into account the efforts being made by euro zone nations to address their respective debt problems.

Barnier, known as part of the pro-Europe wing of the Gaullist movement in France, has served in several key posts in the European Commission. He applauded Europe’s efforts to right its fiscal wrongs but pointed out that the continent is facing a crisis of confidence.

“The real crisis the euro zone faces right now is a crisis of confidence,” he said.

He said Europe must restore confidence in the euro zone and especially in European banks but added that he does not agree with criticism that the region is incapable of surmounting the crisis.

“We often hear that European leaders are too passive. That we don’t do enough. I don’t agree,” Barnier said. “But you must realize this is not a sprint, it is a marathon.”

As 17 euro zone nations need to agree and act in concert on a range of issues, simultaneously swift action is not easy, as distinct from the United States, he added.

He also urged rating agencies to operate with full transparency in the future.

“It would be right for agencies to take better account of the unprecedented efforts being made by the governments [in Europe],” he said, listing specific actions they have taken.

“We are strengthening European banks,” he said. “For the first time ever, the European Central Bank also recently stepped up its response to the euro zone crisis by providing 489 billion euros [$618 billion] in three-year loans to more than 500 European banks.” This move will come in the first half 2012, he said.

However, Barnier acknowledged that the European crisis will not be resolved quickly.

“Since we are taking the right actions and decisions, confidence will come back in six months,” he said.

Meanwhile, George Osborne, the U.K.’s Chancellor of the Exchequer, pledged to make London a new center for Asian investors.

“I believe that we can make Britain the home of Asian investment and Asian finance in Europe,” he said, adding that the country will take the lead in reforming welfare and educational systems and easing regulations on businesses.

“The euro zone has made progress in recent months, in particular the provision of liquidity to banks by the [European Central Bank],” Osborne said. “But of course there remains more to do, as the euro area itself acknowledges.”

Osborne also called on the International Monetary Fund to play a more active role. “The IMF does not belong to any one region of the world,” Osborne said in his speech. “Its role is to support countries which get into difficulty.”

The fifth Asian Financial Forum kicked off yesterday on its two-day run. Around 2,200 financial and government officials from 32 countries gathered in the territory, a rising offshore renminbi market, to attend the forum, which is running under the main theme of “Asia: Driving Sustainable Growth.”

Financial leaders from around the world agreed that Asia will likely see steady growth this year, despite the ongoing European sovereign debt crisis and the U.S. slowdown. Ten promising small and medium enterprises from the Korea Trade-Investment Promotion Agency also attended.

“The rapid growth of the middle-class population of China is driving regional growth in Asia,” Tsang said. “Hong Kong issued a total of $16.6 billion worth of renminbi bonds last year, accounting for 86 percent of the global RMB market,” he said, highlighting how Hong Kong is positioned at the center of growth in Asia.

Haruhiko Kuroda, president of the Asian Development Bank, said that “difficulties will continue in the global economy, but the Asian economy will be able to sustain growth.”

He forecast that emerging countries in Asia will see growth of around 7 percent this year.