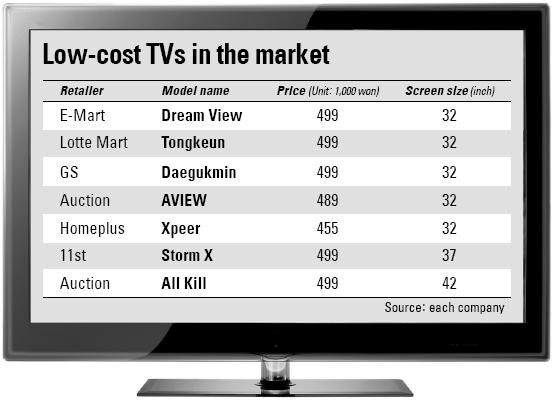 However, Auction will only offer 300 units of the set at this price, the company said. Manufactured by WCD, a domestic company that specializes in high-definition TVs, the model features a full HD display, it added.

“The specifications of this model are good enough for it to serve as the main TV [in a household]. What is significant is that we’re easing the burden on consumers in buying home appliances in this time of rising consumer prices,” said Jeong Jae-myeong, director of the company’s digital home appliances unit.

“We are hoping the sets sell out before the Lunar New Year [on Monday] when Koreans tend to spend lavishly,” said Park Ji-young, the company’s public relations manager. “We’ve only secured a small supply of the sets. Later, we plan to cheaper 32-inch TVs, but we’re not yet sure whether we will continue with the 42-inch sets. It depends on demand, and also on whether we can acquire sufficient supply.” 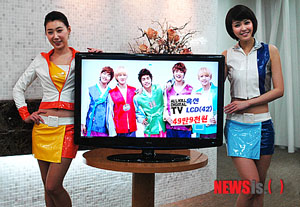 Meanwhile, discount stores such as E-mart and Lotte Mart began rolling out cheaper TVs in collaboration with small and midsized manufacturers late last year. As the products flew off the shelves, online shopping malls and home shopping channels quickly began jumping on the bandwagon.

As competition heats up, the size of the cheaper sets has grown in tandem with shrinking prices, a trend industry insiders expect to continue this year.

Auction’s announcement comes less than a week after Samsung and LG unveiled their plans to roll out low-cost TVs at prices slightly higher than discount stores, online shopping malls and home shopping channels.

“We are currently in the process of developing discounted TVs with plans to release them in the first half,” Lee Ssang-su, an executive vice president of LG Electronics’ product planning department, said last week at the Consumer Electronics Show (CES) in Las Vegas.

“They will be available in both LCD and LED [light-emitting diode] versions, at sizes of both 32 inches and around 40 inches.”

Yoon Boo-keun, the president of Samsung Electronics’ consumer electronics department, also told reporters at CES that “our strategy is to go wherever there is a market,” implying that the world’s No.1 TV maker is also mulling throwing its hat in the ring.

But industry sources predict that Samsung and LG will be hard pushed to rival the prices of major discount stores, with many forecasting that their 32-inch TVs will still be 50,000 won to 100,000 won more expensive.

The rush to appeal to frugal-minded consumers has been led by E-mart, which experimented with a batch of 5,000 cut-price sets last October and saw them sell out in just two days.

While many observers dismissed the gambit as a fad or gimmick, it seems to have stuck.

So far, only Auction has ventured above 40 inches, but sources say that other discount stores and online retailers like 11st Street are preparing to follow suit soon.

Observers also expect the low-cost TV market to expand through 2012 as the government is planning a transition from analog to digital broadcasting at the end of the year and encouraging households to buy digital TVs.

Meanwhile, as the public continues to struggle with rising consumer prices and seeks better deals on everything including home appliances, their choices are multiplying.

E-mart said last week it has begun renting out home appliances like TVs, clothes washers and refrigerators. Under this service, people pay in installments for a certain period of time - for example, three years - after which the products become theirs. Until now, such a service has only been available for home appliances like water purifiers and bidets, which are considered high maintenance.

Under the rental system, people could pay a monthly sum of 43,400 won for four years to eventually own a 42-inch LED TV with a retail price of 1.39 million won. Although they would ultimately pay just over 2 million won for the set, they also have the freedom to stop renting at any time, usually after one year.

Sources say the size of the nation’s rental market for electronic devices broke 10 trillion won last year, up from 3 trillion won in 2006.

Homeplus, the Korean unit of British retail giant Tesco, also unveiled plans to offer a cheap cell phone service earlier this month. The company said it is considering starting a Mobile Virtual Network Operator (MVNO) business in the first half of this year.