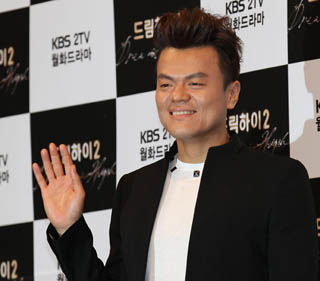 Park Jin-young, known for being the head of JYP Entertainment and a singer in his own right, says he hopes to show how much he has improved as an actor in the second season of the teen drama “Dream High.”

At a press conference on Jan. 17 in Nonhyun-dong in southern Seoul, the entertainer said that he hesitated about acting for the second time in the drama about a high school for aspiring singers.

“After being involved in the first season, I was approached with the offer to come back for a second season,” Park said. “At first I wasn’t so sure. Mostly because there were such high expectations from teenage fans, I didn’t want to disappoint anyone.”

Despite the initial misgivings, the music producer said that he decided to take the offer.
“Around autumn, I had these ideas about what kinds of stories should be told. Then I realized that the message I wanted to convey was ‘What makes you happy?’” the 40-year-old added. “Compared to the first season, I hope to be able to show my improvement as an actor.”

In addition to starring in the drama, to air on Jan. 30, Park is also currently appearing as a judge on SBS’s reality singing program “K-pop Star.” Park is also set to star in the movie “5 Million Dollar Man,” which opens in March.