Gov’t to give free day care for all Korean toddlers

Gov’t to give free day care for all Korean toddlers 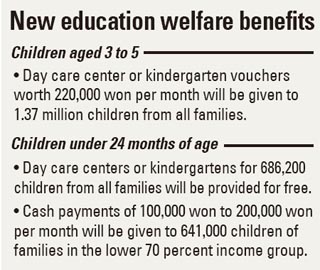 The government is vastly expanding its welfare benefits for families with toddlers.

Following the government’s Nuri Program, which provided free kindergarten for all five-year-olds and day care for kids under 24 months from this year, the government decided to expand the program to three- and four-year-olds starting in 2013. All families will get vouchers for the free day care regardless of their incomes.

And cash subsidies for families with young children are also being expanded. Currently, families in the bottom 15 percent of income levels get monthly cash bonuses for each child under 24 months of age.

Starting in 2013, the subsidies will be given to families in the bottom 70 percent of income levels.

The Prime Minister’s Office, Ministry of Strategy and Finance, Ministry of Education, Science and Technology, Ministry of Public Administration and Security, and Ministry of Health and Welfare held a joint press briefing yesterday at the Government Complex building in Gwacheon, Gyeonggi, and announced that the current program of providing free kindergarten or day care to all five-year-olds and kids under 24 months will be extended to cover three- and four-year-olds as well. Currently, day care for three- and four-year-olds is free only for families in the bottom 70 percent of income levels.

According to the ministries, the measure is a follow-up to President Lee Myung-bak’s New Year’s address this month in which he said, “Child care is an investment for the future.”

If 70 percent of Korean families receive the child care subsidy from next year, it will cover about 641,000 children, up from the current 96,000, which means families from both the lower income brackets as well as the middle class will receive state funds, according to the ministries.

As for the monthly cash subsidies for children under 24 months, they will be given to 70 percent of Korean families compared to only the bottom 15 percent income levels currently. The subsidies are 100,000 won to 200,000 won per month.

Minister of Strategy and Finance Bahk Jae-wan explained that the government decided to concentrate on providing more benefits to families that send their children to day care centers and preschools than families that raise children at home in an attempt to “bring mothers with work experience back to the workplace.” Bahk said, “With a limited budget, it was inevitable to select priorities.”

From 2015, the budget will be taken from the money given to the local governments from the national government.

To allay concerns that local governments won’t be able to afford the new welfare measures, Bahk said, “The financial grants for local education from the national government have been increasing by an average of 6.1 percent annually for the past five years. On the other side, the number of children that need to attend day care centers or preschools has been decreasing, so we believe we have capability [to expand the benefits].”