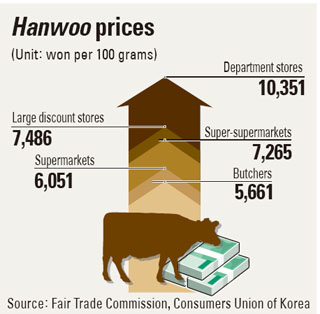 Beef lovers can’t understand why the prices in restaurants and supermarkets remain high despite plummeting cattle prices at livestock farms.

The Fair Trade Commission and the Consumers Union of Korea yesterday revealed who the culprits are: department stores, including Lotte, and other retail giants, including Homeplus.

According to a report released jointly by the country’s watchdog and the nonprofit consumer group, major department stores, large-scale supermarkets and other outlets that are mostly run by leading conglomerates took profit margins of 38.5 percent on their sales of hanwoo, or Korean beef.

That margin is far higher than the 3.8 percent taken at the wholesale distribution stage.

The report showed that the average wholesale price of premium hanwoo in January plunged 22.7 percent compared to October 2010, while the retail price rose at department stores rose 0.9 percent and at large discount stores 12 percent over the same period.

The report was based on an analysis of hanwoo prices at 511 distribution points and 130 restaurants nationwide from Jan. 8 to 11.

Lotte Department Store was found to be selling beef at the higher prices than Hyundai and Shinsegae department stores, while Homeplus was charging more than Lotte Mart and E-Mart.

“The reason that consumers aren’t able to purchase hanwoo at cheaper prices, reflecting the plunging livestock prices, is because of the large profits taken by department stores, large discount stores and restaurants,” said Kang Jeong-hwa, secretary general of the Consumers Union of Korea.

Restaurants in southern Seoul charged the highest menu prices, including Byeokje Galbi in Dogok-dong and Budnamujip in Seocho-dong. The price of their sirloin steak per 100 grams was 50,417 won and 46,154 won, respectively.

The report came as the government has been investigating the country’s beef distribution system because of complaints about prices, especially as people prepare to celebrate the Lunar New Year holiday that falls on Monday.

“We urge department stores, large discount chains and restaurants to immediately lower beef prices in parallel with plunging cattle prices at livestock farms,” the consumer rights group said in a statement. “We also call on the government to establish direct channels between producers and consumers to reduce costs in the process of distribution.”

“The report didn’t consider the costs we have to spend on assuring meat quality as well as sanitary control and packaging,” said an official from Lotte Department Store.