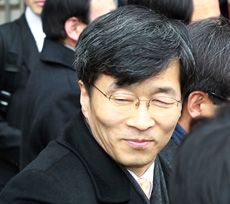 Kwak No-hyun, superintendent of the Seoul Metropolitan Office of Education, was convicted of bribing his former campaign rival and fined 30 million won ($26,400) at his first trial held yesterday and released from his months-long detention by prosecutors.

Kwak will lose his post if the Supreme Court upholds the penalty.

Prosecutors charged the 58-year-old superintendent with violating the Local Education Autonomy Act and the Public Official Election Act, saying that he knew the illegitimacy of giving money to a campaign rival and had mixed intentions of bribing him and trying to help him as well.

Kwak was indicted in September 2011 on suspicion that he handed out 200 million won to Park Myong-gee, a professor at Seoul National University of Education who was a leading candidate during the 2010 election for Seoul education superintendent.

At that time, Park suddenly dropped out of the race, and Kwak became the single liberal candidate and won the election.

Prosecutors suspected that Kwak gave money in return for his rival’s withdrawal. They found that Kwak’s aide and Park’s aide secretly met before the election in June 2010 and agreed to exchange money for Park’s exit.

But Kwak said he didn’t order the agreement and was informed of the arrangement four months after the election.

He argued that eight months after the election, he decided to give the money as a “goodwill” gesture after he heard Park would drop out of the campaign on which he spent so much money.

“We considered the fact that Kwak consistently refused his aides’ suggestion of giving money to Park before the election and that he indeed had the intention of trying to help Park’s poor situation,” the court said.

“However, we concluded Kwak was aware of the illegality of giving money to an election rival and he was actually involved in covering up his aides’ agreement with Park’s [after he knew about it],” the court continued. “As a result, the case could spark more election fraud and corruption.”

Under current election law, if the Supreme Court upholds a ruling that fines an elected government official more than 1 million won, the election becomes invalid and the official loses her or his job.

In such a case, Kwak would also have to return his campaign funds paid by the National Election Commission, about 3.5 billion won, to the government.

The court also sentenced Park to three years in prison and fined him 200 million won. Kang Kyung-seon, a law professor at Korea National Open University and Kwak’s best friend who delivered the money to Park, was also fined 20 million won.

The court said that Kwak wasn’t involved in his aide’s bribery agreement, so it only fined him and didn’t sentence him to jail time. Kwak told reporters that he can’t accept the ruling and will file an appeal.

“I can’t accept the judgment about the bribery purpose of giving the money,” Kwak told reporters after the ruling in front of the court building. “I will do my best to be acquitted.”

“I feel sorry about causing shock and concern to Seoul citizens and my colleagues in the education office,” Kwak added.

When asked if he would continue at his post after being convicted at the first trial, Kwak didn’t respond.

While Kwak was in custody, Vice Superintendent Lee Dae-young, known as a conservative, filled his position.

According to Kwak’s aide, Kwak will restart his work from today, and the first thing he will do is to withdraw the vice superintendent’s attempt to scrap the ordinance on students’ human rights.

After that, he will resume his pending plans, such as expanding the free school lunch program.