China’s push to internationalize renminbi gets help from U.K.

China’s push to internationalize renminbi gets help from U.K. 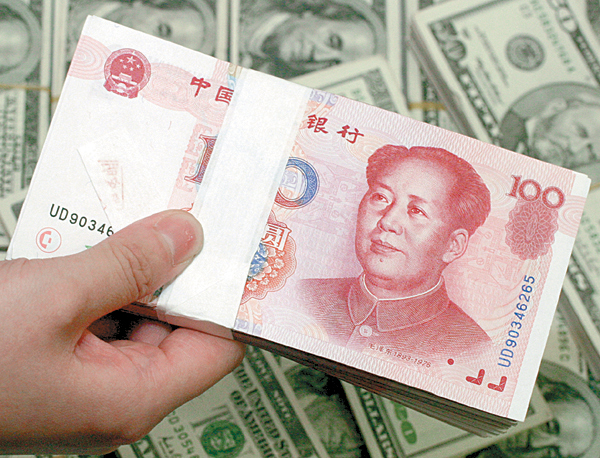 HONG KONG - China and Hong Kong have been spurring efforts to internationalize the Chinese yuan, or renminbi, through trade since 2009.

The effort accelerated recently with United Kingdom declaring its desire to become an RMB center in Europe.

At the fifth Asian Financial Forum that took place early this week in Hong Kong, officials from the Hong Kong and Chinese governments were busy talking up Hong Kong as an offshore RMB market to high-ranking government officials, financial and business players and scholars from other countries.

Hong Kong has held the financial forum for five years touting the RMB as a promising international currency.

This year, George Osborne, U.K. Chancellor of Exchequer drew attention with a keynote speech about enhancing economic ties between the U.K. and Hong Kong and making London another RMB hub.

“We want to expand the amount of business and trade we do with each other, so that the citizens of China, Hong Kong and Britain all benefit from the prosperity and jobs,” Osborne said.

Praise for the RMB abounded at the forum.

“We made a lot of progress last year, and this year we will continue to diversify our renminbi products,” Norman TL Chan, Chief Executive of the Hong Kong Monetary Authority said. “With more products there will be more investor interest and, hence, the reserve pool will expand.”

Anita Fung, Group General Manager and CEO of the Hongkong and Shanghai Banking Corporation Ltd, sounded confident that the RMB would become a global reserve currency.

“There are signs that the renminbi is gradually becoming a trade-related currency,” she said. “This year, I expect the market share and volume will increase for renminbi for various trade purposes.” Hong Kong, she added, “can play an important role in boosting its status.”

According to Fung, RMB-denominated investment reached RMB 19 billion ($3 billion) last year, even though an official figure hasn’t come out yet. She also said RMB-denominated stocks currently account for 15 percent of market capitalization in Hong Kong.

Hong Kong has increased efforts to become an offshore RMB market with the introduction of a pilot RMB trade settlement scheme in July 2009 in cooperation with the Chinese government.

As for new links between the U.K. and Hong Kong, Kelvin Lau, senior economist at Standard Chartered bank in Hong Kong, displayed optimism.

“Having another key offshore RMB center is very logical,” he said. “It works very well for Hong Kong, not just for China. Once the reach of the RMB through trade is extended to wider corners of the world, then all the flows in both centers would increase as well, so the pie will be bigger.”

He stressed that cooperation between London and Hong Kong to work together to expand RMB products is a “very correct move.”

Professor K. C. Chan, Hong Kong’s Secretary for Financial Services and the Treasury, also hoped that the U.K.-HK deal would work well. “We want to expand RMB around the world,” Chan said.

“To make it happen, we need to rely on financial centers in the other part of the world.”

According to SCB’s Lau, there are two key aspects of the Chinese move towards internalization of the RMB.

“The whole development of the RMB offshore market is to facilitate China’s ambitions to internationalize its currency, so everything has to start from that perspective,” Lau said.

For geographical reasons, China started with Hong Kong to realize its ambitions. It is now trying to work with the U.K. to broaden the currency’s reach.

“Maybe China wants to work with everyone in the world, but it doesn’t want to open up all things at one go,” Lau said. “It is going step by step.”

Despite the efforts to internationalize the Chinese currency, the Bank of Korea said in a recent report that progress is not likely to be swift.

However, Lee Sung-han, President of the Korea Center for International Finance, warned that there could be some downsides for Korea if the RMB is going to become an international reserve currency.

“There is a risk that Korea’s reliance on the Chinese market could reach a dangerous level,” Lee said. “It means that changes in Chinese monetary volume and policy would have direct impacts on the Korean economy.”

Lee recommended that Korea take advantage of the internationalization of the RMB, which will ultimately make China open up its market. “It would give Korean companies chances to issue RMB bonds and go public on Chinese stock markets more than now,” Lee said.