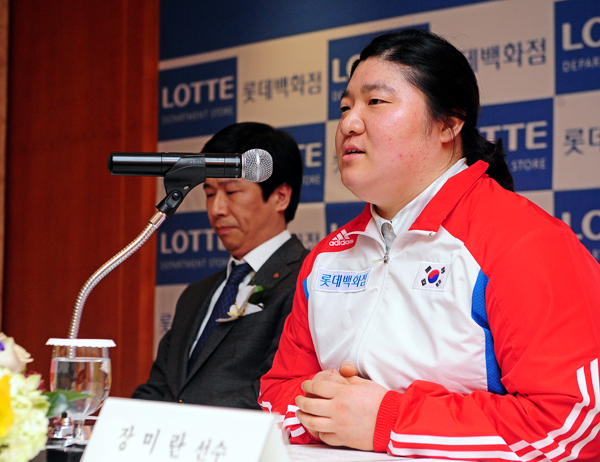 By all measures, weight lifter Jang Mi-ran had a disappointing year in 2011. Battling nagging injuries and struggling to remain in form, she missed the world championships for the first time in six years. While she was sidelined, younger lifters stepped up and set world records in her over-75-kilogram (165-pound) division.

Looking back, the 28-year-old lifter said yesterday she will try to take some positives from last year and win her second Olympic gold medal.

“Obviously, I don’t have fond memories of last year,” Jang said at a press conference. “But through those difficult times, I was able to discover things that I had to do to overcome myself.”

Jang is one of the most decorated female weight lifters in history. She won the gold at the 2008 Beijing Olympics and also has four world titles and one Asian Games gold medal to her credit. Winning titles at the Olympics, the Asian Games and the world championships is considered the weight lifting equivalent of a “grand slam.”

Despite such an extraordinary resume, Jang said she isn’t taking anything for granted in her buildup to London.

“I’ve become more careful, meticulous and specific in my preparations,” Jang said. “Before, I think I might have trusted myself a bit too much.”

Jang said her conditioning is improving under a new training regimen, adding, “I think I can accomplish my dream if I can stick to the program.”

Jang once held world records in her division in snatch, clean and jerk, and combined weight. But Russia’s Tatiana Kashirina now holds the snatch record with 148 kilograms, set during a Russian competition. China’s Zhou Lulu has the world record in total weight at 328 kilograms, which she lifted en route to the world crown last year.

Jang has held the clean and jerk record of 187 kilograms for more than two years, though that record has also been threatened. Despite whispers that she was on the downhill of her career, Jang stopped short of saying London will be her last appearance.

“I’ve never discussed retirement myself, and maybe you guys [in the media] want me to quit,” Jang said with a smile. “There are good times and bad times in training. But so far, I’ve enjoyed competing and also feeling the sense of accomplishment in training.”

She said, without elaborating, that she has set a new goal for herself and added, “I think I might retire when I realize that goal.”

Jang did discuss her goal away from competition. She said she plans to launch a foundation bearing her name that will assist weight lifters and athletes in other minor sports.

She said her foundation will not simply offer monetary aid to young athletes, but also set up meetings between youngsters and star athletes that they look up to as role models.

Through her foundation, Jang said she wants to map out a life after sports for young athletes. Yonhap