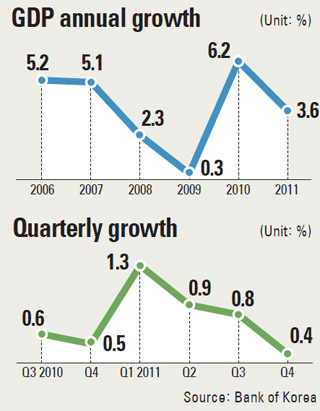 The dark clouds looming over Korea’s economy have started to pour as GDP growth in 2011 was sharply down.

The slower growth was attributed to a significant drop in corporate and private spending caused by fears of the unresolved debt crisis in Europe.

“The fourth quarter performance was much lower than we expected,” said Kim Young-bae, head of the economic statistics department at the central bank.

“Companies and households reacted hypersensitively to the sovereign debt crisis in Europe in the fourth quarter,” Kim said.

“As confidence fell, so did investment in facilities and plants as well as private expenditures.”

Kim noted that investment and consumption will likely improve as the debt crisis in Europe seems to be coming to a resolution.

Last year’s growth was far lower than the central bank’s revised projection of 4.3 percent and the Ministry of Strategy and Finance’s 4.5 percent. It was even lower than the state-run Korea Development Institute’s more conservative outlook of 3.8 percent.

Private expenditure in the fourth quarter contracted for the first time in nearly three years. It posted minus 0.4 percent growth.

Additionally, companies’ investment in plants and facilities slowed alarmingly, growing only 3.8 percent annually, compared to the 25 percent hike in 2010.

The biggest worry is slowing exports, which account for half the nation’s gross domestic product. The central bank’s report made it evident that last year’s export growth was plummeting, especially in the final quarter.

The Korean government and policy makers have been stressing the need to boost the domestic market to cushion the blow from uncertainties abroad. The government recently announced plans to spend 60 percent of the annual budget in the first half of this year to stimulate domestic demand.

But with high inflation and household debt levels, the domestic market has shown little signs of taking off.

The first quarter is expected to be pretty much the same as the final quarter of 2011.

The International Monetary Fund has lowered its estimate of this year’s global economic growth. The growth of emerging markets, although better than Europe’s, was lowered, including China’s, an economic engine of the past decade.

“There’s no denying it,” said Ronald Man, an HSBC economist. “GDP figures from the final quarter of 2011 confirm that weakness is now embedded inside Korea’s economy. While this is far from a hard-landing scenario, it is becoming clear that the economy will need a healthy boost, especially with no signs of a rebound anytime soon.”