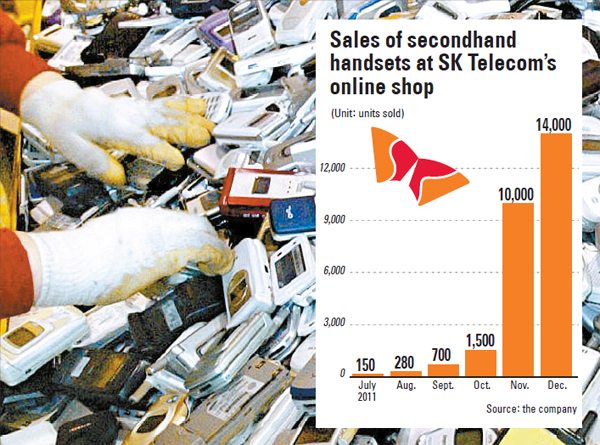 In just a few months, people in Korea will be able to buy secondhand mobile phones at high street stores operated by mobile carriers, which will effectively take a semi-underground industry and make it more credible, more reliable and, they hope, more ubiquitous.

At present, used phones can be found mostly in parts of Seoul that are popular with foreigners, such as Yongsan and Itaewon, but supplies are limited, guarantees are shaky, and most of the phones are bought online from individuals then re-sold on the street.

However, as word of the new plan begins to spread, some in the industry are skeptical of just how much demand there will be from Koreans.

SK Telecom, Korea’s largest mobile carrier, told the JoongAng Ilbo on Wednesday that it will start selling used phones at the 34 offline retailers across the country that it directly operates starting from April.

“At present, we are making preparations for the new system,” a company official said. “Eventually we will make these phones available at other shops [that are independently owned].”

This would mark the first time in Korea that a mobile carrier is selling secondhand phones at its offline retailers.

The new move could shake up the present state of the industry, where people lock themselves into two- or three -year contracts with a carrier in order to secure the latest smartphone at a significantly cheaper price than just buying it outright.

Until now, people wanting to buy secondhand phones had to resort to online marketplaces, where individuals would make transactions amongst themselves. That came with strings attached, however, as people could get scammed and find themselves embroiled in hard-to-resolve disputes. Buying a used phone through a mobile carrier lessens that risk.

The company started selling used phones, which it dubs EcoPhones, at its online shopping Web site (tsmartshop.co.kr) last July. It sold just 150 in the first month, but saw sales grow exponentially to 1,500 in October and 14,000 in December.

SK Telecom claims that 95 percent of these phones are sold in less a month, and that it sees much potential in this business as it does not have to spend much on marketing activities, such as offering subsidies, unlike with new phones.

Furthermore, with many Korean households feeling the pinch due to rampant inflation, growing levels of debt, stagnant wages and a contracting economy, carriers hope to appeal to consumers forced to adopt a more frugal approach to spending on goods such as electronics, which are seen here as over-priced.

However, the company said it will allow the buyers of secondhand phones to subscribe to its rivals, KT and LG U+, as well as to Mobile Virtual Network Operators (MVNOs), which are business that rent networks and frequencies from carriers and offer mobile phone services.

“We won’t make any restrictions or regulations that will force the buyers of these phones to subscribe to SK Telecom only,” said an official from the company.

The new business could also better prepare the mobile carrier for a new phone distribution system set to be adopted in Korea from May. Under the new system, people will not necessarily have to buy phones through mobile carriers anymore. Instead, they will be able to activate phones purchased from overseas simply by using a Universal Subscriber Identity Module (USIM) chip.

Soon after SK Telecom’s announcement, KT, the No. 2 player Korea’s mobile market, said it will also jump into the secondhand phone business.

“The company will start a similar service in March, and go a step further by introducing payment plans specific to used phones in May,” said Kim Yoon-jeong, one of KT’s publicists. Currently, KT only operates an online venue on its Web site allowing individuals to buy or sell used phones among themselves.

Lee Jung-hwan, a spokesman for LG U+, said independent shops will likely shun used phones because they yield lower profit margins, and Korean consumers have built a reputation as early adopters who prefer splurging on brand new products.

“These days, you can get perfectly good deals on brand new phones. So we are unlikely to see great enthusiasm for buying used models. Also, you can get better deals on used phones at existing Web sites run by individuals [rather than at SK Telecom’s shops],” one market insider said.