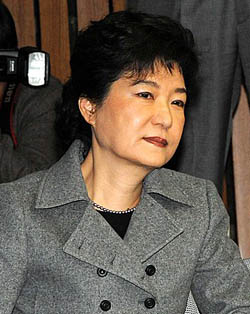 The ruling Grand National Party will change its name next week to redefine its image before the April 11 legislative elections.

The emergency leadership of the GNP endorsed yesterday a plan to rename the party while deferring a restructuring of the party on the U.S. model in order to focus on the upcoming campaign.

Representative Hwang Young-cheul, the party’s spokesman, said the party will receive recommendations from the public on the new name over three days starting from today and pick a few candidates after experts’ review.

The party’s new name and logo will be approved at an emergency council meeting on Monday and its National Standing Committee and National Committee will approve the changes officially.

The process will be complete when the new name is registered with the National Election Commission by Feb. 10.

The Grand National Party was founded in 1997 through a merger of the New Korea Party, the Democratic Party and other conservative parties. Its earliest incarnation was the Democratic Republican Party under former President Park Chung Hee.

The party yesterday decided to defer a restructuring plan to decentralize the party’s power from the chairman and Supreme Council to the party’s floor leader.

“That would be an enormous change, it’s about changing the foundation of the party,” Representative Park Geun-hye, the GNP’s interim head, was quoted as saying by Hwang at the emergency council meeting. “I understand the intention, but some reforms are possible to implement right away while others require more in-depth discussions.”

Park has been reluctant to agree with the reformists’ demands to scrap the current party structure, which gives a lot of power to the chairman and the Supreme Council. The reformists have demanded that the GNP must restructure to give more power to the floor leader.

Although she said the timing was not right to make the change on Jan. 16, Lee Sang-don, a law professor and a member of the emergency council appointed by Park, said the party needs to be rid of the chairmanship and Supreme Council. He recommended the GNP follow the model of the Republican Party of the United States, stressing the role of its National Committee.

“Even in the United States, the party plays a significant role during an election period,” Hwang said. “Because we are preparing for the legislative election right now, the emergency council members agreed that the timing is undesirable to have the discussion. The conclusion is that we have to talk about it after the election, step by step.”