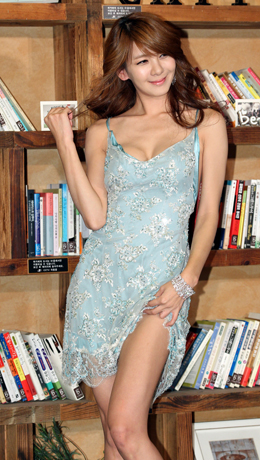 Entertainer Epani was in for a surprise when the lights went out during a curtain call for the musical “Let’s Go to the Rose Inn” on Jan. 31.

The model-turned-singer was bowing to the crowd at Venus Hall in central Seoul when the lights went dark and the romantic song “What a Relief” started playing as the star’s boyfriend appeared on stage.

“As a bee is drawn to honey, I am naturally drawn to you. I promise to love you and then love you some more,” musical actor Seo Sung-min said as he got down on one knee.

Seo presented his lover with a three-carat diamond ring thought to be worth around 350 million won ($310,700). The crowd went wild as Epani accepted the public proposal and treated the fans to a passionate kiss.

“No date has been set for the big day, but I can tell you that she was ecstatic about the proposal,” a representative from Epani’s agency told My Daily on Feb. 1.

Entertainment news Web sites have since speculated that the wedding will take place in March. The couple seems to be wasting little time on romantic niceties, as the engagement comes just one month after they publically confirmed their relationship.

On Dec. 23, Epani’s agency said the star had been seeing Seo for the past five months. The couple met in August when they took part in the celebrity drag-racing event “R Stars.” One month after becoming acquainted, the two officially started dating.

Epani rose to fame in 2006 after winning a model search contest run by Playboy Korea. The starlet was previously married and has a six-year-old son.