McDonald’s fans have beef with hike

McDonald’s fans have beef with hike 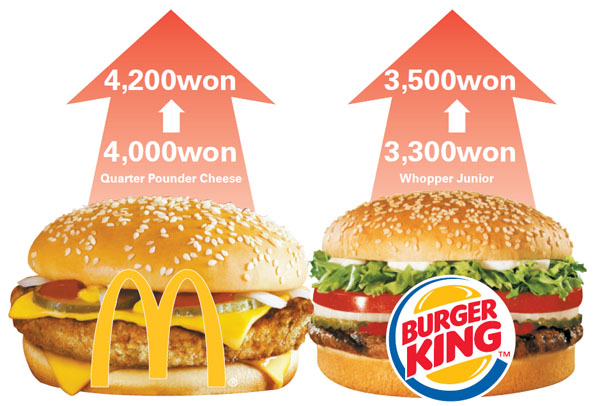 McDonald’s Korean operations faced mounting public criticism yesterday as the fast-food company raised the prices of some of its popular hamburger set menus and other items without providing any advance notice, just eight months after its latest hike.

As of yesterday, the chain’s Korean outlets began charging an extra 200 won (20 cents) for its breakfast McMuffin set menus and lunch set menus, meaning that consumers now have to cough up 3,200 won for a sausage McMuffin with egg set.

Meanwhile, the McFlurry dessert - vanilla ice cream that comes with three flavors of toppings and has proven a huge hit with Korean consumers - moved up 100 won to 1,800 won, while a McCafe Americano will now set them back 2,200 won, a rise of 10 percent.

“Due to surging food prices, including vegetables, we had no option but to raise our prices,” said a spokesperson for the company. “But we didn’t raise the prices of our signature Big Mac or Shanghai Spicy Chicken Burger, also a top seller.”

McDonald’s raised its prices by an average of 1.26 percent, but also shaved 400 won off the cost of its hot cakes, a popular breakfast menu item, to appease customers and show them that the company did not make the adjustments out of greed, the same employee added.

In response to criticism that the chain engaged in a “sly” move by dropping the price changes on the market with such a bombshell move, the spokesperson simply said, “McDonald’s has no policy requiring it to give prior notice of changed prices.”

In China, McDonald’s has charged customers more on four occasions since July 2010. On none of the occasions did it provide advanced notice, and each time it was met with a shower of criticism from angry Chinese.

According to industry sources, SRS Korea, which runs the rival U.S. fast-food franchise Burger King, raised the prices of 10 of its burgers last Dec. 7 by an average of 4.7 percent, also without giving consumers any warning. It now charges 3,500 won for a Whopper Junior, a rise of 200 won that brings the flame-grilled burger closer to the 3,700 won that McDonald’s charges for a Big Mac.

But Burger King survived the price adjustments largely unscathed, in part because of its minnow-like status compared to McDonald’s in Korea, where the golden arches and Ronald McDonald represent the undisputed foreign fast-food king.

Customers showed a predictable lack of appetite for McDonald’s latest move, with Netizens blazing a fiery trail across the Web.

“I stopped by McDonald’s to a grab breakfast set today,” a blogger called Jinvet posted on his Naver blog yesterday “The store has not changed the prices on its signboards, but the staff charged me more money citing the price hike .?.?. Maybe I should sue them for hoodwinking me.”

Another salaried worker surnamed Kim, who lunched at a store in Gangnam, southern Seoul, yesterday, said the chain should reconsider its decision. “Local manufacturers tried to raise the prices of milk and beer last year, but they overturned their decisions out of respect for the government’s anti-inflation push,” he said.

Others disagreed. “The price increase is acceptable, because prices of everything are going up nowadays,” said Shin Ki-won, a company worker. “But I hope this won’t be repeated in the future until grabbing a hamburger becomes part of a luxury lifestyle.”