Girls’ Generation brings the boys out in the U.S.

Girls’ Generation brings the boys out in the U.S. 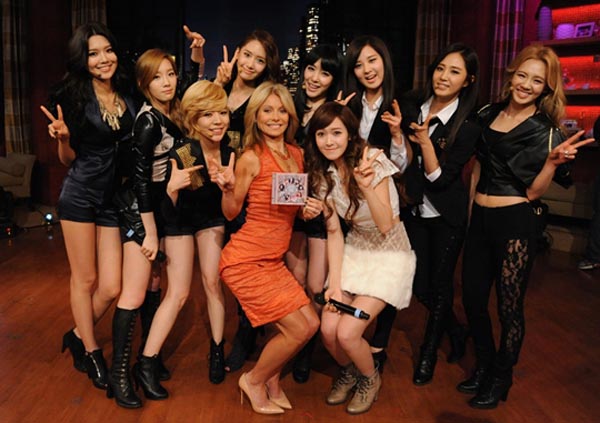 
Girls’ Generation, one of K-pop’s most popular girl groups, performed back-to-back on two of America’s major talk shows earlier this week. The group kicked off its television appearances on the legendary U.S. late-night talk show “Late Show with David Letterman” on Tuesday, during which the girls performed a band version of their hit song “The Boys.” It was the group’s first performance on a U.S. television program.

The following morning, the girls performed the same song on ABC’s “Live! with Kelly.” To cap off a busy day at studios in New York, the nine-member group gave an interview on NBC’s entertainment news program “Extra.”

Girls’ Generation took up prime nighttime and daytime slots on the air, to promote the album “The Boys” - released on Jan. 17 in the United States - to a wide range of audiences.

As special musical guest on Letterman, the Korean girl group performed while the house band played its version of the album’s title track. Letterman introduced Girls’ Generation as a “very popular group from South Korea who have just released their first album in America.”

The girls, dressed in black lacy outfits, dazzled the studio audience and the talk-show host, who thanked the group members in Korean.

Ahead of the performance, fans crowded in front of the CBS studio on Broadway with signs and posters in hand, hoping to catch a glimpse of the girls. The group took the time to sign autographs.

The following morning, on ABC’s “Live! with Kelly,” the in-studio crowd chanted “SoShi,” the group’s nickname in Korean, much to the amusement of Kelly Ripa and Howie Mandel, the show’s hosts that morning. After the performance, the two asked the girls questions ranging from what the audition process was like to who hogged the mirror the most.

“You are such a gorgeous group of women,” Kelly gushed. “I’ve never seen such audience participation in all my life.”

Tiffany and Jessica, two members who were born in San Francisco and speak English fluently, did the talking on behalf of the group.

“We’ve all been practicing since we were as young as age 10 and maybe 15, so we’ve been together for a pretty long time,” Tiffany said. “So we’re kind of like sisters,” Jessica added.

Mandel seemed taken aback by the girls’ fluent English. “Your English is very good!” he said.

“That’s potato!” Jessica exclaimed as the crowd burst into laughter.

“Thank god it was potato,” Ripa said. “That could have been very uncomfortable.”

To wrap up the day’s performance, the girls taught the two hosts some dance moves to their song. When asked what the choreography was called, the girls said they would call it “The Ripa.”

“It was such an honor to appear on ‘Late Show with David Letterman.’ We nearly cried when we heard that they wanted us on the show. It was all so surreal and hard to believe it was happening for real until we stepped into the studio,” the group said.

Girls’ Generation said it hopes its emergence in the U.S. market will lead to a U.S. tour followed by a world tour.

Interscope Records, the label behind the band’s U.S. album release, said that the band’s appearance in the United States was a huge success.

“We hope to see many more similar opportunities for the band in the future,” said a representative from the record label.