At the end of every month, working professionals in Korea tend to watch their bank balances with a sense of anticipation and dread. On the one hand, receiving their monthly pay in one lump sum can be a source of pleasure; on the other, steep credit card bills often take the wind out of their sails.

This is because Korea’s card payment market is notoriously skewed toward credit card usage.

Of all the cards held by Korean consumers in 2009, 91 percent were credit cards. Comparable numbers in Western countries are 57.7 percent for the U.S. and just 7.3 percent in Germany. 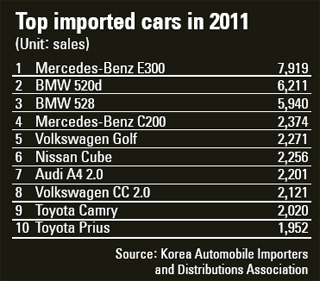 But incentives to switch to debit cards are growing. Financial regulators have been pumping out measures to make debit cards more attractive and easy to use since heralding them as the solution for Korea’s swelling debt problem. It also sees them as an effective way of staving of a repeat of the “credit card crisis” seen in 2003.

Card companies have responded to regulators’ initiative with varying degrees of enthusiasm. Shinhan Card, Kookmin Card and NH Card, the three biggest players in Korea’s debit card market, have focused on leveraging their position to introduce new products such as “hybrid cards,” or debit cards that switch to credit cards when the deposit balance is used up.

Kookmin Card’s “it series” of debit cards, such as “it Play” or “it Style,” are all so-called “dual payment” cards that are used as credit cards after a prearranged debit limit has been reached. The customer can either set a debit limit between 20,000 won and 2 million won per transaction, or between 50,000 won and 10 million won per month, with any usage above those limits being charged on credit. NH Card also launched similar services for its debit card products early this month.

Although there has been criticism that such hybrid cards defeat the purpose of encouraging debit cards to curb profligate spending as they ultimately turn into credit cards, regulators are hoping that they prove a useful gateway product to migrate more people over to debit cards.

These also offer an attractive range of perks and discounts. Leading player Shinhan Card’s most popular debit card is the “Shinhan S20 Check Card,” geared toward customers in their 20s. A set of perks designed to fit the spending patterns of this generation, such as discounts on public transportation, mobile phone bills and coffee shop purchases, enabled some 470,000 S20 cards to be issued since its launch in September.

Woori Card and Hana SK Card are also racing to catch up.

Woori Financial Group said earlier this month that it will raise the revenue share of debit cards within its card business from 18 percent to 30 percent within this year, while over 1 million units of Hana SK Card’s best-selling “Hana SK Mega Cashback Check Card” were issued within 10 months of its launch due to the benefits it offered, including 200 won returned for every 20,000 won spent at any location where debit cards are accepted.