Buoyed by Hallyu, sales of makgeolli wash over Japan

Buoyed by Hallyu, sales of makgeolli wash over Japan 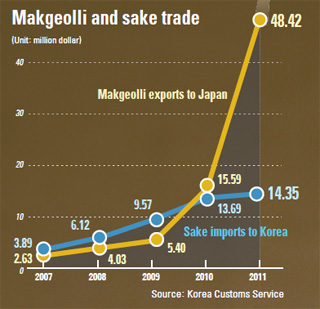 A makgeolli boom has been taking Japan by storm since 2010, proving another cash cow for Korean breweries.

Korea exported three times more of its traditional rice wine to Japan last year by sales than the amount of sake it imported from the neighboring country as demand for the sweet, milk-colored beverage continues to soar among Japanese consumers.

“While sake imports saw slower growth this year, demand for makgeolli among Japanese is surging as they view it as a healthier beverage,” said a Korea Customs Service official.

“Although the gap between sake imports and makgeolli exports has been shrinking since 2010, sake imports are still rising, just slower than before.”

As recently as three years ago, Korea was spending almost twice as much on Japanese sake as Japan was forking out for Korean rice wine, with respective numbers of $9.5 million and $5.4 million in 2009.

Twelve months later, the gap had nearly evaporated as Korea shipped out $15.5 million of makgeolli to Japan and bought almost as much - or $13.6 million worth of - sake.

While the balance swung in favor of makgeolli last year, the results were also affected by the radiation leak at Japan’s nuclear plant in Fukushima in March and the impact of the rising yen.

Recent statistics and analysis on changing consumption patterns and trends released by the Korea Customs Service claim that Japanese started tinkering with their drinking habits after being affected by the second blast of the Korean Wave, which has seen K-pop take over Asian airwaves in much the same way that Korean soap operas first did a decade ago.

According to the agency, a total of $52.7 million worth of makgeolli was exported worldwide in 2011, breaking the $50 million mark for the first time. Japanese take up the lion’s share, having gobbled up $48.4 million, or more than 90 percent, of the total last year.

The export boom has led one local manufacturer, Baesangmyung Brewery, to build a specialized distillery in Chicago, marking the first time a makgeolli distillery has been constructed overseas.

The brewery said U.S. consumers will be able to enjoy a version of the drink made in the ‘Windy City’ as early as July, and that it plans to build more overseas factories in Los Angeles, Osaka and Tokyo soon.

Meanwhile, Koreans also seem to be showing a greater appetite for foreign wine, a category in which sake is usually included.

Lotte Mart, one of Korea’s leading discount stores, announced recently that it sold more foreign wine by revenue in the second half of last year than soju for the first time in its history, even though the difference was a mere 0.2 percent.

Beer remained consumer’s top pick for the six-month period, based on sales of 40.7 billion won, followed by imported wine (14.3 billion won), soju and whiskey, it said.

E-Mart, another discount store, experienced a similar trend as it saw imported wine sales leapfrog soju sales by 0.6 percent from July to December, officials there said.

In fact, imported wine sales have shown formidable growth in the last decade, with the number rising from $20 million in 2000 to $135 million last year, according to Statistics Korea.

In previous years, for example, sake imports grew by around 40 percent a year, before this slowed to 7.3 percent last year, when the total figure stood at $14.3 million.

Industry sources said that while makgeolli may be in the ascendant in terms of trade volume, sake imports will continue to grow at a varying pace. Some argued that, without the tsunami early last year and the high conversion rate of the yen that pushed up prices, sake imports to Korean may have grown 40 percent again last year.

Park Jeong-sun, a Korean-Japanese entrepreneur who runs Okatte and Daidokoro, two popular Japanese restaurants and drinking dens in southern Seoul, said there is much room for Japanese sake imports to keep on growing.

He said his establishments are packed every night and that demand is surging for side dishes that accompany sake, such as yakitori, or grilled chicken on skewers.

“While many bars in Korea refuse to sell whiskey or soju by the glass, this is normal in Japan,” he said. “We offer both sake and wine by the glass and carafe to target consumers who don’t want to drink a whole [720 milliliter] bottle. A growing number of Japanese eateries in Korea are adopting this part of the culture and I think demand will continue to grow.”

Chung Da-eun, a 29-year-old company worker, said she prefers a glass of sake to soju despite the slightly higher price tag. “I find it hard to finish a bottle of soju. I think drinkers like me would much rather just savor a glass of sake,” she said.

Koreans began developing an appetite for foreign wine in the early 2000s and this was reflected in sales after Korea and Chile signed a free trade agreement in 2004 that led to shipments of almost low-priced Chilean wine making their way into the country.

In the years that followed, wine bars mushroomed as the beverage became accepted as simply another option on a night out rather than being seen as part of a luxury lifestyle.

“Wine sales will grow further when the Korea-U.S. free trade agreement comes into effect this year, since a 15 percent tariff will be immediately removed,” said Lotte Mart spokesperson Kim Min-seok. “Customers will have more wines to choose from apart from those produced in Chile and Europe.”