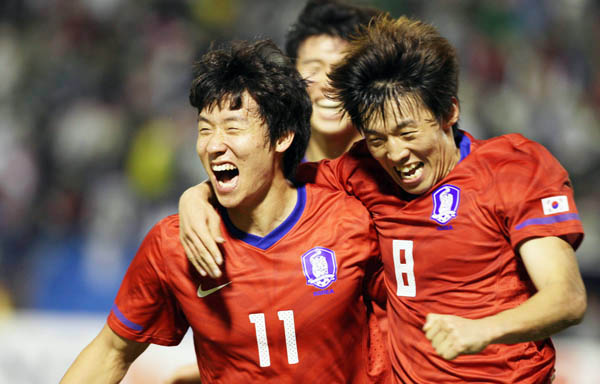 Kim Bo-kyung, right, celebrates with teammate Kim Tae-hwan after scoring a goal against Saudi Arabia during the Asian qualifiers for the London Olympics on Sunday in Dammam, Saudi Arabia. [YONHAP]


A late second-half goal from Kim Bo-kyung against Saudi Arabia saved the Olympic football team in the Asian qualifier for the London Games with the match ending in a 1-1 draw on Sunday.

At the Prince Mohammad Bin Fahd Stadium in Dammam, Saudi Arabia, Kim, 23, pulled out the equalizer in injury time to prevent what would have been a shocking loss for Korea. The midfielder who plays for Japanese club Cerezo Osaka ran into the penalty box and finished with his left foot after striker Kim Hyun-sung headed the ball his way.

The goal ensured the Under-23 team would maintain its lead in Group A with eight points from two wins and two draws. The Olympic team could have lost top position in the group if Oman had beaten Qatar on Sunday.

The Gulf nation was awarded a 3-0 victory by the Asian Football Confederation last week after it ruled that Qatar had used an ineligible player in their previous qualifier. Oman moved to only one point shy of Korea and had a chance to move top of the group, but it drew 2-2 with Qatar on Sunday. Oman is still a point behind Korea on seven.

“It was a difficult contest, and I am pleased we stayed focused until the end and got the point,” goal scorer Kim was quoted as saying by Yonhap News Agency. “But we didn’t play up to our capabilities. We weren’t as aggressive on offense as we had been before.”

Korea, coached by Hong Myung-bo, was able to get its first shot on target in the 34th minute when team captain and defender Hong Jeong-ho hit the woodwork with a header following a cross from Kim Bo-kyung.

Misfortune struck again when left back Hwang Do-yeon, who was originally filling in for injured Yun Suk-young, left the pitch with an injury at the end of the first half and Hong had to send in midfielder Kim Min-woo to take his spot.

But this substitution backfired later as Kim failed to return to his position in time as a counter attack from Saudi Arabia took advantage of the space to score in the 60th minute. Goalkeeper Lee Bum-young was initially able to stop second-half substitute Omar Khudari’s header, but the Saudi forward easily put in the rebound to give the home side the lead.

After conceding the goal, Korea substituted in midfielder Yoon Bitgaram and winger Kim Tae-hwan to strengthen their attack and pushed its players forward, but the equalizer came too late for the young Taeguk Warriors to pursue victory.

Coach Hong said he was thankful for the players’ effort, but lamented his side’s inability to finish from set pieces. The team failed to take advantage of its 11 corner kicks and has now scored just five goals in four games, while surrendering two.

“We had a long period of preparation, but didn’t manage to show it,” Hong said. “I think for this match, Saudi Arabia prepared better than us.”

Korea, who is seeking its seventh straight and ninth overall appearance at the Olympics, faces a crucial qualifier on Feb. 22 when it plays Oman on the road. Its final qualification game is set for March 14 against Qatar at home.

“The Oman game will be the most important one for us,” Hong said. “We have to learn from this game against Saudi Arabia and make improvements.”