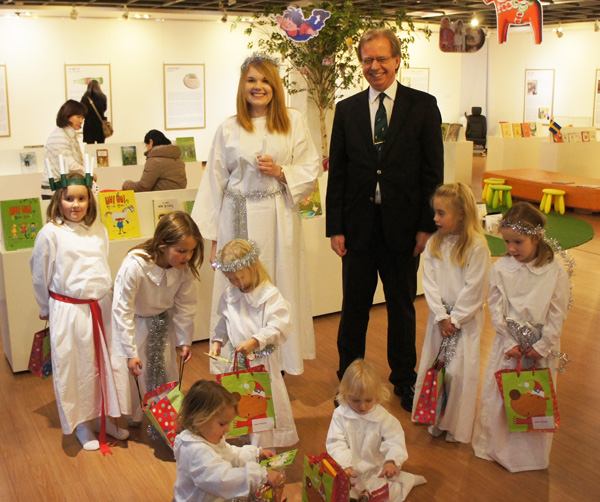 The Swedish Embassy in Seoul introduced Swedish inventions and fairy tales to Korean children at a special exhibition that runs through Feb. 15. Renowned chemist Alfred Nobel’s inventions and popular tomboy Pippi Longstocking, with her red hair in two pig tails, were introduced to the children.

In cooperation with the state-run National Library for Children and Young Adults in southern Seoul, the embassy launched the exhibition in an effort to promote the history and culture of the northwest European country to local children.

The exhibition titled “Hello? Sweden” displays 10 popular Swedish inventions such as the zipper, the Coca-Cola bottle and the vacuum cleaner, and introduces a series of bigwigs who were as dedicated to modern civilization as they were to their inventions.

“We have held a string of exhibitions in cooperation with embassies in Seoul to introduce various cultures of overseas countries to children at the library’s exhibition hall,” Ahn Seung-mun, the librarian in charge of coordinating the exhibition, said.

“We have also hosted the annual symposium with overseas libraries. In 2010, Director of Vaggeryd Public Library in Sweden visited us and delivered a presentation at the symposium.”

“This time, we and the Swedish Embassy launched this exhibition with the aim of informing the innovative spirit of Sweden through introducing those inventions used in daily life and also to show some popular children’s books,” Ahn said.

“So far, approximately 3,900 children have visited the exhibition with their parents.”

Bak Hyun-jung, an official at the Swedish Embassy, said they could extend the display period of the exhibition.

“The exhibition earned a good response from Korean children and the library officials and we are considering extending the original display duration up to the end of this month,” Bak said.

“We are also considering holding the exhibition in other cities as well.”