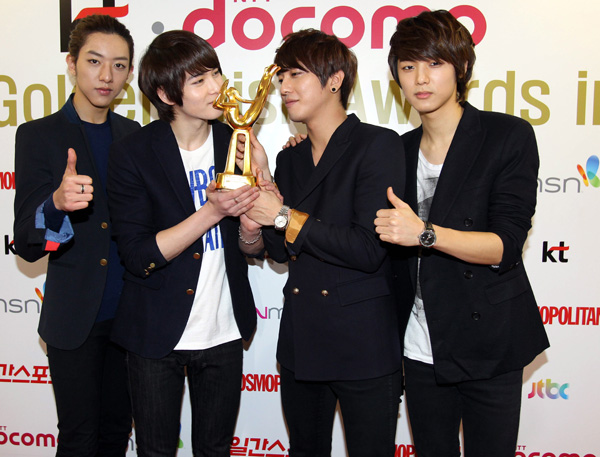 The quartet K-pop act CN Blue has broken a record that has been unsurpassed for some 41 years. The band released its second single “Where You Are” on Feb. 1 and usurped the No. 1 spot on the Oricon weekly chart by selling more than 60,000 copies in its first week.

This is the first time that an overseas rock band has topped the weekly chart since Canadian rock band Mashmakhan topped the charts with the song “As the Years Go By” in 1971.

Meanwhile other K-pop solo artist and duo acts to have topped the singles chart are TVXQ, a duet by Kim Jae-joong and Park Yu-chun and Jang Keun-suk – but CN Blue is unlike other K-pop groups as the band members play their own instruments.

In addition to the title track “Where You Are,” composed and written by the vocalist and leader of the group Jung Yong-hwa, the band’s new single album contains two additional songs: “Get Away,” composed by member Lee Jong-hyun, and “Feeling.”

The band is extremely popular all over Asia, including Japan.
On Jan. 7 the band touched down in Hong Kong for a concert before travelling to Taiwan for another performance.