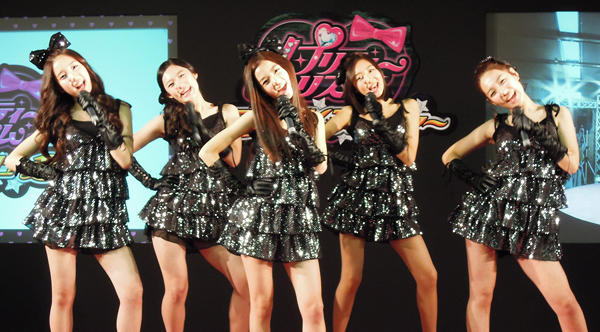 Newbie K-pop group DSP Girls will debut in Japan before starting work in Korea. To promote the group, its agency DSP Media produced a series of animated shorts that tell how each member became a singer. The films will hit Japanese airwaves in April. Provided by DSP Media

The nation’s music industry is already saturated with girl groups and boy groups but new artists keep swarming in. Until they gain recognition, most bands look pretty much the same with stylish outfits and flashy dance moves that look as though they’ve just come off of a factory assembly line.

This has forced entertainment agencies to get creative when introducing new artists. These days, groups make their first appearances overseas or do a stint in television or film before making an official entry into the market. Social networking services are also playing an increasingly important role in creating buzz for new groups before they go public.

Most recently, DSP Media, which manages Kara, SS501 and Rainbow, unveiled its new five-member girl group in Tokyo late last month. Tentatively entitled DSP Girls, the group made its first appearance in Japan. The group was there to promote an animated short entitled “Pretty Rhythm” that will air on TV Tokyo in April. The film, which combines live action and animation, follows the five DSP Girls and how each of them becomes a singer while competing with a Japanese girl group.

DSP Media chose to introduce the group this way in order to capture Japanese fans of animation. 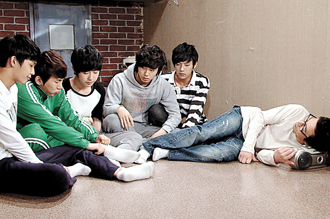 The boy-band trainees in JTBC’s sitcom “Life in Cheongdam-dong” are real-life trainees at Cube Entertainment. The group, which includes two members who are not on the show, will make its debut next March.

“We thought it would be compelling to tease the group through animation first,” a DSP Media official said. “DSP Girls will make their official debut around the time when the animated short hits the airwaves.”

Sometimes, girl and boy groups appear outside of music before releasing a song or album. Instead of appearing on music shows or giving concerts, they often land roles in sitcoms or drama series first in order to promote a girl- or boy-next-door image.

The five boy-band trainees on the JTBC sitcom “Life in Cheongdam-dong” are real-life trainees at Cube Entertainment, famous for musicians such as BEAST and 4minute. On the sitcom, the five trainees live in poverty in hopes of becoming successful one day. They live in an underground room with no windows and they practice day and night but they also do many menial part-time jobs to make ends meet, such as sewing eyes onto stuffed animals, the perennial job for poor people on sitcoms.

Although the trainees haven’t made their debut yet, many sitcom fans have posted messages about them on the Internet. Many fans have launched YouTube channels for them both here and overseas. According to the Cube Entertainment, the five trainees will soon make their debut next month along with two other members who are not part of the sitcom.

“They sing, dance and act in the sitcom. I believe it’s one way to get closer to the audience,” an official from the entertainment company said.

Chansung, a member of 2PM, also made his debut on a sitcom in 2006. He appeared on “High Kick without Hesitation” as a a teenage boy who loves to rap before making his first appearance with the band in 2008.

SM Entertainment, the largest agency of its kind, is currently promoting its new boy bands EXO-K and EXO-M worldwide through Facebook and YouTube. The two groups are slated to debut in Korea and Japan at the same time in the first half of the year.

For the past 40 days starting last December, the company has been releasing teaser videos of both groups.

“We recently saw a wide K-pop fan base in places as far as Latin America and Europe, so we introduce not only established musicians but also new musicians through social networking services,” SM said in a press release.

Video clips of EXO-K and EXO-M have already attracted more than 10 million page views on YouTube.

B.A.P., a new six-member boy band, is also a beneficiary of SNS marketing. TS Entertainment, which manages the boy band, employed social networking marketing in English before the group’s debut. As a result, the boy group’s first showcase attracted about 3,000 fans in and outside of Korea, far surpassing other showcases that attract between 200 and 500 fans on average.

“Some fans flew from as far as Sweden, Germany and Britain,” a TS official said.