Touchdown for Korea Inc. in the U.S.

Touchdown for Korea Inc. in the U.S. 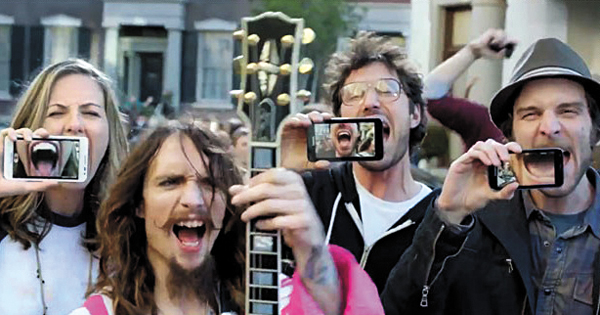 This year’s Super Bowl, which took place in Indianapolis, Indiana, on Sunday, may prove a commercial success for Korea Inc. as a number of the country’s top brands showered in the spotlight through their game-time commercials.

Korea’s two leading automakers, Hyundai Motor and Kia Motors, spent outlandish amounts on advertisements as they continue to ramp up their presence in the U.S. However, they still found themselves competing with Japanese rival Toyota, which returned to the Super Bowl after a three-year absence.

The annual championship game of the National Football League (NFL) is one of the most-watched sporting events of the year and a day when more food gets consumed in the U.S. than almost any other time of the year. This makes it a golden opportunity for foreign brands aiming to penetrate the U.S. market and raise their global presence.

Korean tech titan Samsung Electronics also took part in the Super Bowl advertising frenzy this year for the first time ever, apparently in an attempt to convince consumers of the superiority of its smart mobile devices at the expense of U.S. archrival Apple.

Hyundai Motor has been airing commercials at the Super Bowl since 2008.

This year, it took out five television spots: Two before kickoff, one during the coveted pre-kick time slot and two during the game. 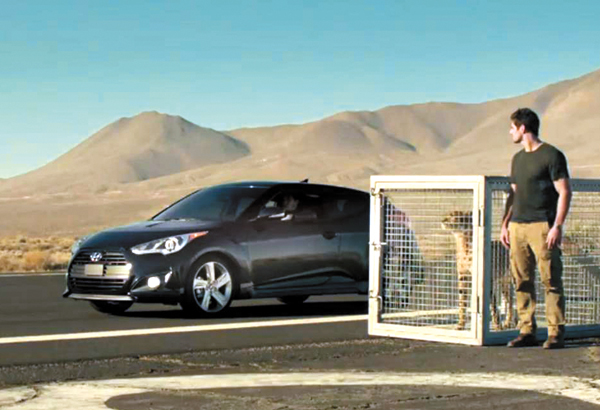 One was an ad for the Veloster, which shows off its speed by blowing away a cheetah in a road race.

Hyundai Motor is believed to have spent more than 23 billion won ($20.6 million) in total on the commercials. A 30-second spot during the game sold for an average of $3.5 million, according to NBC.

“The Super Bowl is watched by more than 100 million people and is one of the largest sports events in the world, so the advertising effect from it is enormous,” one Hyundai official said. “With the commercial, we anticipate seeing interest in our new models spike, along with recognition of our brand.”

Hyundai has witnessed huge sales growth recently in the lackluster U.S. auto market, and it has targeted 4.5 percent growth there this year on the back of four new models set to be unveiled.

Samsung Electronics, the world’s No. 1 maker of flat-screen televisions, smartphones and computer memory chips, also aired a 90-second Super Bowl ad, which according to the company was the longest during the game. According to NBC, the ad would have set the company back some 11.7 billion won.

The New York Times analyzed that more viewers tune into the Super Bowl than other key American football matches because it manages to transcend sport and offer mass entertainment. 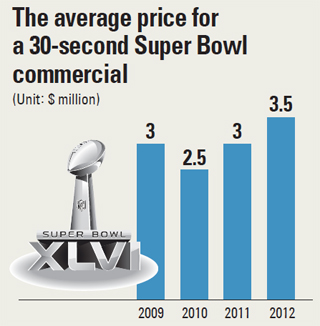 Sunday’s game was seen by 111.3 million people in the U.S., the biggest audience for a single TV broadcast in the country’s history.

The effects of a good Super Bowl ad can be exponential: Volkswagen’s 2011 commercial featuring a young boy imitating Darth Vader won over Americans and received more than 44 million hits online.

Korean companies have been gearing up their overseas sports marketing activities this year.

Samsung also recently gave a Galaxy Note - a cross between a smartphone and a tablet - to tennis stars Maria Sharapova and Svetlana Kuznetsova at the Fed Cup in Moscow, it said yesterday.

It also sponsored a massive cheering session at the Africa Cup of Nations through a mega-sized outdoor screen at an event in which over 30,000 people participated, it said.