Korea’s chaebol are annoyed at the rise in corporate bashing being done by politicians ahead of general elections in April.

But they’re not too worried it will lead to substantive changes in government policy.

“We’re hearing more anti-conglomerate campaign promises this year than in any other election season,” an executive of a conglomerate said. “But we know that those pledges will fizzle out after the election.” 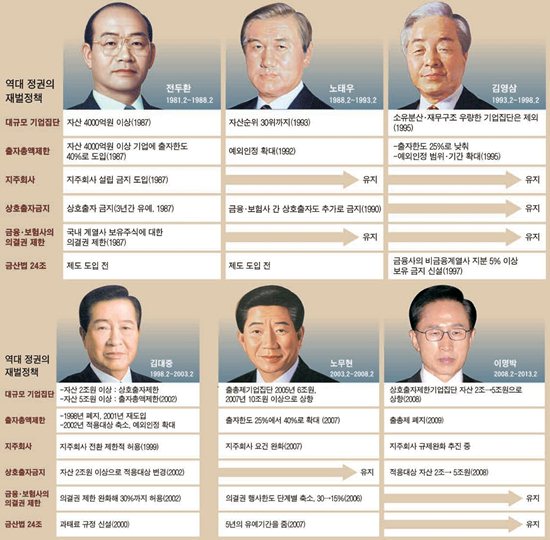 Some businessmen say the rising flood of public criticism of big companies is making them reluctant to announce good business performances.

The JoongAng Ilbo surveyed executives of 10 conglomerates on Monday, and seven said they were aware of the lashings being doled out by politicians and incumbent government officials over their allegedly mean treatment of contractors and suppliers and their encroaching into the markets of smaller companies.

They said the government blames the conglomerates for economic inequities, even though it’s the government that promotes an export-driven economy that built and sustains the big companies.

“When the economy goes into a slump, they ask us to cooperate with small- and medium-sized companies,” a conglomerate official told JoongAng Ilbo on the condition of anonymity. “But when the economy rebounds, they change their attitude and try to restrict us. This excessive corporate-bashing causes groundless prejudice against conglomerates in the public.”

“Both ruling and opposite parties started their corporate-bashing at the same time this year,” Bae Sang-geun, a senior official at the Federation of Korean Industries, said. “And we are wondering if they can come up with a balanced policy [on conglomerates].”

Prime Minister Kim Hwang-sik warned Tuesday that politicians should “ponder whether their acts would put excessive burdens on the businesses of conglomerates.”

Industry analysts say several former presidents pledged to rein in the conglomerates at the beginning of their administrations, but those promises were mostly withdrawn or postponed.

Former President Kim Young-sam revised the Fair Trade Act in 1994, a year after his inauguration, and lowered the ceiling on conglomerates’ investments in subsidiaries or new business areas from 40 percent to 25 percent of total assets. However, the system was withdrawn in 1997 when the country suffered in the Asian financial crisis. Former President Kim Dae-jung revived the system in 1999, but relaxed it only nine months after.

Former President Roh Moo-hyun made an election campaign pledge to introduce an administrative power to forcefully separate a subsidiary from a conglomerate when there was an unfair subsidy. But after he was inaugurated, Roh postponed the bill indefinitely.

President Lee Myung-bak, who described himself as a “president for the economy,” promised to support conglomerates in his early days but is now spending more energy trying to control them under the slogans “shared growth” and a “fair society,” according to industry observers.

“This year, politicians’ attitudes regarding conglomerates are the worst ever,” said Bae from the Federation of Korean Industries. “Some problems with the conglomerates could be resolved by encouraging companies’ social sense or business morals, but politicians are always trying to solve them through laws and regulations.”