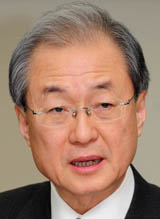 One day after the Democratic United Party publicly threatened to scrap the free trade agreement with the United States, Trade Minister Bark Tae-ho fought back with his own theory of why it has already proven a success prior to being implemented.

At a meeting hosted by Bark yesterday at the government complex building in Gwanghwamun, central Seoul, he insisted that the Korus FTA has served as a catalyst for Seoul to sign similar pacts with other major economies.

“Big markets like the European Union, China and Japan began showing interest in the Korean market after the Korus FTA negotiations began,” he said. “In this sense, it played an important role for the nation in terms of firming up ties with other countries.”

As for the opposition party’s claim that it will reverse the recently approved FTA, which is expected to be implemented soon, if it gains power in this year’s legislative or presidential elections, Bark said this was regrettable. “Having majored in international trade, I feel uncomfortable at hearing the opposition’s argument because of what it would do to economic and political relations between the two countries,” he said.

“Most parts of the Korus FTA were negotiated during the former administration,” he said. “[Only] very few parts, such as those dealing with automobiles and pork, were renegotiated under the current administration.”

“I feel uncomfortable that such arguments arose at this time,” he added. The U.S. ranks as the world’s largest economy with a market worth $14.5 trillion that accounts for almost one quarter, or 23 percent, of global gross domestic product (GDP)

“If we lose out in the U.S. market, it will be impossible to reclaim our market share there,” Bark said.

As for when exactly the trade pact with the U.S. will take effect, Bark said this will be fixed when the two sides exchange letters after going through a final checking process.

“Our goal is to have the trade deal take effect at the end of this month,” he said, going on to stress the importance of pursuing a similar deal with China.

“When Korea and China sign an FTA, Korea will become a hub country for such pacts. Companies from the U.S., EU and Japan that are eyeing the Chinese market will be willing to increase their investment here,” Bark said. “This will also help create jobs for young people and boost the local economy.”

Bahk said the deal may not be handled before the presidential elections in December. “It cannot be handled in a short space of time,” he said. “The task could be passed on to the next government.”