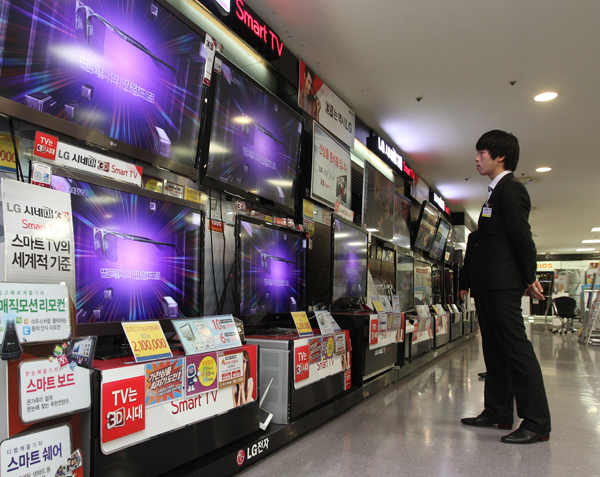 Smart TVs on sale at a discount store in Seoul yesterday. KT, Korea’s No. 1 fixed-line operator, announced it will limit the functions of smart TVs due to concerns about the overloading of its network. [YONHAP]


KT, Korea’s No. 1 fixed-line operator and No. 2 mobile carrier, announced yesterday it will partially restrict the usage of smart TVs starting today after months of failed negotiations with their manufacturers over the network overload the products can cause.

KT is the first telecom operator in Korea to resort to such a measure. 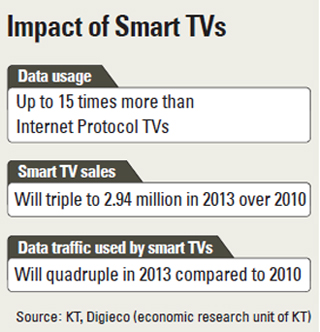 “We will restrict Internet access by smart TVs - which use Internet networks without permission - starting Feb. 10,” KT said in a statement yesterday. “Such a decision was inevitable in order to protect Internet users and keep market order.”

KT officials said that smart TV owners will be able to continue to watch programs and use high-speed Internet as before, but they will be restricted from running applications and accessing application stores.

KT said it can shut off certain circuits used by the TVs to use apps and access app stores.

With those functions restricted, smart TVs will be little different than the earlier generation technology, Internet Protocol TV.

Currently, one million smart TVs are thought to be in use in Korea, according to market statistics. People use smartphones through their fixed-line networks, serviced by KT, SK Broadband or LG U+.

Smart TVs are being strongly promoted by Samsung Electronics and LG Electronics, the No. 1 and No. 2 TV makers, both in Korea and globally. But domestic telecom operators view the products as a danger to their networks.

KT alleges this will eventually cause average Internet users to suffer. Its research predicts that such data-gobbling services will monopolize the networks, and the Internet speed for average users could become 265 times slower as a result.

KT said it does not give out the percentage of total traffic now being used by smart TVs over its fixed lines but emphasized that the figure will rise exponentially as smart TVs catch on with consumers.

According to Digieco, the economic research unit of KT, smart TV sales will triple in 2013 compared to 2010, while data traffic from those devices will quadruple in the same period.

KT said the restrictions will apply to Samsung Electronics’ smart TVs alone because LG Electronics has agreed to a meeting to talk about the issue.

Last October, SK Telecom, KT and LG U+ - the country’s three telecom companies - delivered an official document to the Korea Telecommunications Operators Association, stating their belief that smart TV makers should be charged according to network usage and that the relevant companies should come together for a discussion.

“[KT’s move] is in violation of the principle of network neutrality,” said Samsung Electronics in a press release, “which says that Internet service operators should not discriminate between Internet traffic, and there has to be an objective verification into its allegations that smart TVs cause excessive data traffic.”

Sources said that SK Broadband and LG U+ are also seriously debating measures similar to KT’s.