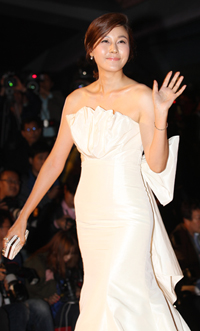 Actress Kim Ha-nuel has been cast to play the female lead in the upcoming SBS drama “A Gentleman’s Dignity,” opposite Hallyu star Jang Dong-gun. Kim’s agency announced on Feb. 8 that she will play the role of a strict ethics teacher who is also a baseball referee in her spare time.

The 20-part SBS weekend drama is expected to be a hit as the same creative team behind the 2010 hit drama “Secret Garden,” Kim Eun-sook and Shin Woo-chul, will write and direct, respectively.

The comedy drama will air in May and has been described as a middle-aged male version of the popular U.S. sitcom “Sex and the City.” The plot revolves around four men in their forties and four women who are chasing after romantic ideals. Other actors so far confirmed to star in the show are Kim Min-jong and Kim Su-ro.

Kim last appeared on screens in the MBC drama “Road No. 1,” almost two years ago.