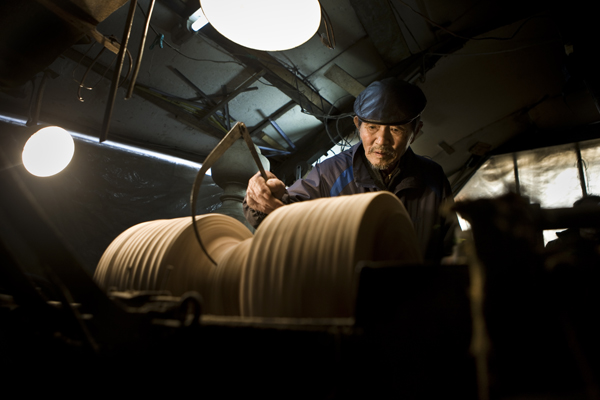 Kang Sin-ha uses the machine he developed to carve wood from a royal foxglove tree into an hourglass-shaped janggu at his studio in Gimje, North Jeolla. Kang became a janggu craftsman after working in a coal mine in Japan during the colonial era, which he says gave him the dexterity to execute his craft. By Kwon Hyuk-jae

The vast grain fields of Gimje, North Jeolla, were annexed in 1914 during the Japanese colonial period, but the sound of traditional Korean music played by Korean farmers never left the place.

Rather than lamenting their misfortune, the farmers made sure that their music resonated throughout the region in order to boost the spirits of their fellow Koreans during the hard times. At the heart of this sound was the janggu, an hourglass-shaped drum.

Kang Sin-ha, 90, has been making janggu for 60 years using the same techniques he learned as a young man, since he believes that a “janggu made by machine cannot make an appropriate sound.” But before becoming a master craftsman, Kang was an inventor first.

Kang began learning how to craft janggu when he was 30, when the country was on the verge of war. He was returning to the country jobless after having been forced into labor at a coal mine in Japan. 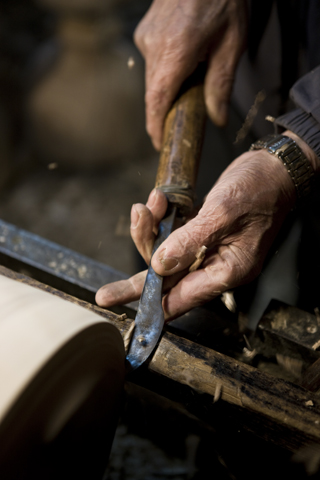 Kang Sin-ha carves a janggu at his studio in Gimje, South Jeolla.

“I only found out that I was at a coal mine when I got off from the boat,” Kang told the JoongAng Ilbo in an interview at his studio in Gimje. “I couldn’t earn a single penny.”

He said he had been told he would be working at a steel factory, earning money for his family. But he spent the next years working in the coal mine, at the Mitsubishi dockyard and elsewhere before returning to Korea. Though the experience was harrowing, he said the skills he learned would later give him the dexterity he needed to carve janggu.

When he was back in Korea, Kang made the difficult decision to learn a new skill and began studying janggu construction with master craftsmen Baek Bong-nam and Seon Un-pil.

“It was a time when everybody was starving to death and since I was willing to learn how to make janggu, they did not refuse,” Kang said.

Although starting a new trade wasn’t easy, Kang caught on quickly and was soon busy filling orders. He learned to make the instrument the old-fashioned way, using wood of the royal foxglove, or paulownia, tree and carving the body with only a chisel and hammer. It was a time-consuming process that sometimes held him back.

“We weren’t always able to deliver our janggu on time,” he said.

To speed the process, Kang began studying automechanics and ultimately made a semi-automated lathe that would spin the wood quickly while he carved it with a chisel. His invention soon saw him produce up to six janggu a day and allowed him to expand his operations beyond Gimje to Gunsan and Iksan.

“Since people couldn’t always bring the wood to me, I would take the machine with me to places where people needed me to make janggu,” he said.

Sometimes, his creations would spark rivalries between towns, with musicians asking him to make their janggu better than the ones he made for competing towns.

“People asked me to make janggu that would make a bigger sound than the janggu from other towns,” Kang said.

Because this was a job that only a master craftsman like himself could accomplish, demand for his work increased.

According to Kang, a janggu is shaped as it is for a reason. The jorongmok, which is the round tube in the middle connecting the two sides of the hourglass-shaped body, makes a deep, clear echo sound, Kang said. The length of the jorongmok determines the sound, with wider tubes producing deeper sounds and narrower tubes producing a crisper sound.

“When making a janggu, it is crucial to control the shape since one mistake could produce an entirely different result,” Kang said.

In Gimje nongak, the janggu is the only drum used, so it is very important that it be made well. During his lifetime, Park was said to have visited Kang often to order custom-made janggu.