The life of Cardinal Kim, through his donated eyes

The life of Cardinal Kim, through his donated eyes 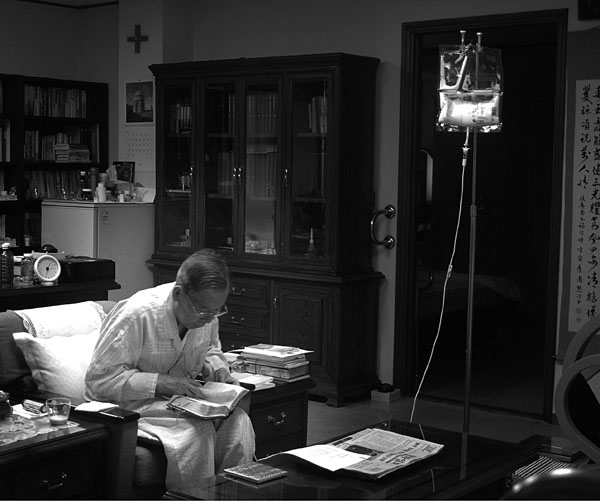 Cardinal Stephen Kim Sou-hwan (1922-2009), who was respected by Catholics and non-Catholics alike, inspired the public by donating both his eyes to two patients in need.

He had vowed to donate his organs as early as 1990, a practice that was at the time relatively uncommon in Korea, declaring he would “give everything and leave with nothing.” 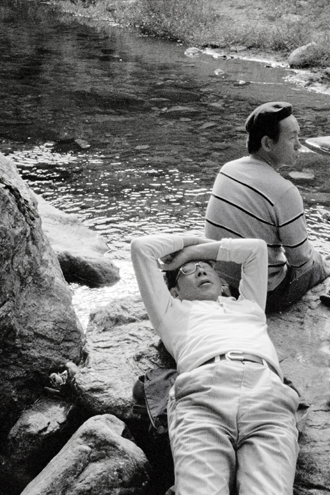 Cardinal Stephen Kim Sou-hwan reads a Bible while getting an IV, with multiple bottles of medicine resting on top of the refrigerator.

Celebrating the legacy of Kim on the third anniversary of his death, an exhibit of 120 photos is on display at the Wa Gallery in Yangpyeong, Gyeonggi, which includes for the first time photographs of the corneas he donated.

“Cardinal Stephen Kim has lived a life full of love for others,” said Jeon Dae-sik, the photographer whose work is on display at the exhibit. “A picture of his eye is the most adequate picture to show his soul.”

This is exactly what Jeon said to Professor Ju Cheon-gi, who took the photo of Kim’s cornea on Feb. 18, 2009, at Seoul St. Mary’s Hospital before it was donated.

Ju has kept the photo himself, promising to prevent information about the people who received Kim’s eyes from leaking, but after Jeon’s convincing words, Ju decided it was time to show the picture to the people.

What Kim saw through these eyes in his 86 years was not always peaceful. He could not neglect the struggles he witnessed and fought for social justice and democratic principles. He devoted his life to reaching out to the underprivileged.

The eye on display reminds many of Kim’s warmth and others of his passion, but regardless of what people see when looking at the cardinal’s eye, they are reminded of the fact that with Kim’s donation, he provided light to two people who had been living in darkness.

When Kim knew he did not have much time left, he began looking for people who were in need of eye transplants. A 73-year-old woman who lost her sight for 50 years after a tragic accident and a 70-year-old man who had been blind for more than 30 years were chosen by the cardinal. The two received Kim’s eyes and started new lives.

The donation of his corneas was symbolic of Kim’s larger mission. He established an organ donation group, One Body, One Spirit, in 1988 with the will to share life with others, and it received 36,500 pledges in 2010, up from some 34,000 in 2009. The public campaign to promote organ donations has continued in an upward trend.

The other 119 pictures capture the personality behind these life-altering campaigns. Some of the pictures were taken by Jeon, who worked at a Catholic newspaper since 1989 until last year, and others were gathered from Kim’s acquaintances. Most are shots of his ordinary life and have never before been shown to the public.

Most remember Kim as having an innocent smile, but the man behind the facade had struggled since the 1970s. He suffered from insomnia, often sleeping just two to three hours a night, weighed down by the pressures of his work.

In his later years, Kim depended on prescriptions to overcome his sleeping disorder, a situation captured perfectly by one of the photos taken at his house in June of 2008. In the picture, shown above, Kim is reading a Bible while getting an IV, with multiple bottles of medicine resting on top of the refrigerator.

Those who do not have time to take a long ride to Yangpyeong can see the pictures through a book titled “Cardinal Stephen Kim Sou-hwan, His Faith and Life in Pictures.”

The book starts with a short congratulatory message from Choi In-ho, the author who has been battling cancer: “Although Cardinal Stephen Kim Sou-hwan has left our side, he has gone beyond time and space and still remains in our hearts like a flower that never withers.”

On the third anniversary of Kim’s death, special masses will be held at Myeongdong Cathedral and at Yongin Catholic Park Cemetery.

The exhibition runs through April 29. Admission is free. It is open from 11 a.m. to 6 p.m. on Tuesdays to Sundays. Go to the bus stop near Yangpyeong Station, take bus 4-7 or 4-8 and get off at the Venezia Cafe stop and walk for five minutes. For more information, visit www.gallerywa.co.kr or call (031) 771-5454.