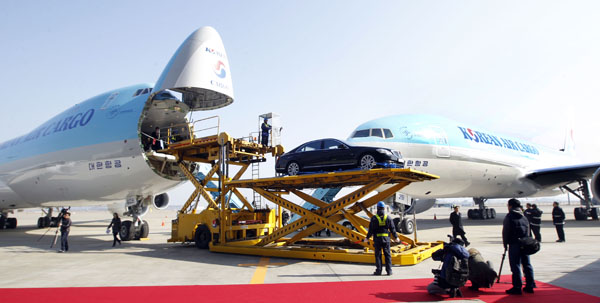 Korean Air unveils two new cargo aircraft, the B747-8F, left, and B777F, near its hangar at Incheon International Airport yesterday. The airline said it will bring in six additional B747-8Fs by 2016 and four more B777Fs by 2015.

Korean Air President Chi Chang-hoon told the press that the airline intends to gradually expand the reach of its cargo operations to new regions including South America and Africa. As of last year, the airline ranks as the world’s second-biggest cargo carrier after Hong Kong-based Cathay Pacific.

Chi also said Korean Air will pursue a multi-hub strategy, having also established a cargo hub in Navoi, Uzbekistan for its operations in Europe, Russia and central Asia.