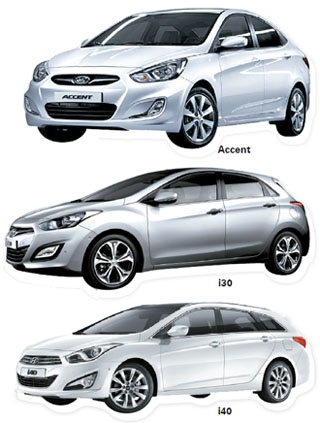 Hyundai’s i40 may have been named Korea’s car of the year by local reporters last month, but it is hardly representative of the cars seen on the streets of Seoul, given that station wagons are not very popular in the country. However, the i40 is enjoying quite a ride in Europe.

In fact, there are a number of domestically made cars like the i40 that are regarded as ugly ducklings in Korea but swans in other regions.

Although it is unfair to compare domestic and foreign sales of vehicles given the vastly different sizes of the respective markets, automakers’ ability to meet their targets can serve as a general barometer of cars’ popularity at home compared to overseas.

When the i40 debuted last September, Hyundai originally intended to sell 8,000 units in Korea and 27,000 abroad by the end of the year. 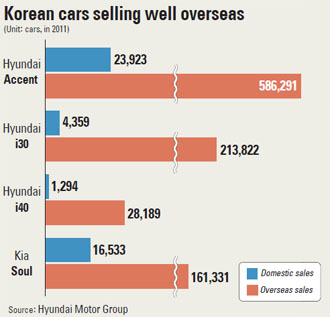 Hyundai missed its domestic target by a large margin, selling just 1,294, but managed to shift a healthy 28,189 overseas.

But this disparity was greatly amplified for certain models, such as the i40.

“Station wagons are simply not popular in Korea,” said a Hyundai Motor spokesman in explaining the lackluster demand at home, adding that this was due to people’s different lifestyles.

“Pickups and sport utility vehicles are much more popular in the U.S., as people often need to load large household goods in their cars because home deliveries are not as common there,” he said, adding that wagons are more popular in Europe.

As such, the i40 was developed primarily for the European market and is not available in the U.S.

“In the past, cars were developed for consumers across the board, but now we tend to develop new vehicles for specific markets,” he said.

The i40 is also relatively expensive in Korea for its size, another factor that detracts from its appeal.

It ranges from 28.3 million won ($25,180) to 30.7 million won, or slightly less for the diesel model - quite a sum for a car based on the Avante, a compact sedan. It also compares unfavorably with Hyundai’s Sonata, a midsize sedan that starts from 20.4 million won.

Similarly, Hyundai Motor’s three-door Veloster failed to reach its sales target in the domestic market but fared well in the overseas market.

The vehicle that was introduced in April only sold 10,946 units at the end of last year, which is below the 18,000 target. On average 1,200 Velosters were sold every month.

In January, Veloster sold 1,693 units in the U.S. market, which is far more than the 386 units sold in the local market.

In recent years, Hyundai Motor and its affiliate Kia Motors have been focusing more on the global market, especially since the two affiliated carmakers have already won a dominating 80 percent share in the local market.

Additionally, thanks to price competitiveness resulting from the won-dollar currency exchange, the largest Korean automakers appealed to the wider global audience, while competitors such as Toyota fell from grace.

The assertive marketing strategies are finally paying off as consumers worldwide are re-evaluating the vehicles while the companies are rolling out new sophisticated machines specifically designed for global audiences.

Kia’s Soul was also well received overseas but fared poorly at home. The box car sold 16,533 units here last year but almost 10 times that number in the U.S., where it emerged as the best-selling car in its segment for the year.

It proved six times as popular as Toyota’s Scion xB (17,017 units) and was seven times more in demand than Nissan’s Cube (14,459 units). Kia is an affiliate of Hyundai.

The Soul managed to appeal to young consumers with its innovative design and practical features, including an iPod dock.

The carmaker also scored with its U.S. television commercial, which featured dancing hamsters.

Building on this success, Kia introduced the Track’ster, a boxy concept car based on the Soul at the Chicago Auto Show last week.

Meanwhile, Hyundai developed its i30 for the European market, where hatchbacks such as the Volkswagen Golf are considered mainstream, and sold 213,822 units outside of Korea last year.

It also found a huge market for its Accent subcompact in Russia, where it is known as the Solaris, amid a warm welcome for the model in general overseas, where sales were 24-fold higher than in Korea. Hyundai added standard options to the Russian version to make sure that it runs without problems in the country’s harsh weather conditions.