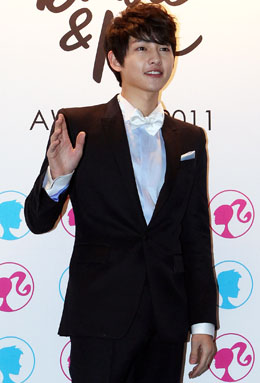 Song Joong-ki has been selected to represent Coca-Cola's beverage Sprite. "We thought that Song Joong-ki's vibrant image fit in well with the direction of the brand," said a representative from Coca-Cola. A TV commercial for Sprite featuring Song will begin to air from March 1.

Song made his debut in 2008 in the movie "Ssang-hwa-jeom" and rose to fame last year playing the role of the young King Sejong in the SBS drama "Deep Rooted Tree." He is currently filming the movie "Teenage Werewolf."

Song received much praise from the public late last year when he announced he would donate his fee for narrating the six-part MBC documentary "Tears of the Antarctic," to charity.