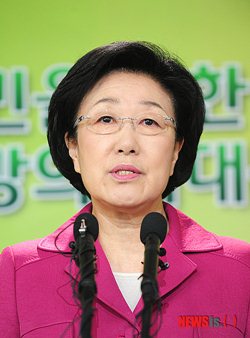 One remark missing from the event, though, was regarding the Korea-U.S. free trade agreement, which analysts say reflects the DUP’s concern that attacking on the issue would be political suicide before the upcoming general election.

Instead, Han called for the April 11 general election to serve as a referendum of the Lee administration’s overall policies and its series of corruption scandals.

“The past four years under President Lee Myung-bak have been a culmination of collective mismanagement, failure and inability - and the worst part is the corruption,” said Han at the press conference. “With this irresponsible and incapable cabinet, it is impossible [for the country] to make a single step forward.”

Han called the Lee administration “shameless” despite its “wrongdoings” and said the public will not tolerate the remaining year of the administration. Lee is scheduled to host a press conference next week to reflect on his first four years as president and announce the policy goals of his remaining year. The 2012 presidential election is slated for December.

“President Lee should apologize before the public and should fully replace the irresponsible, incapable cabinet,” Han said.

Han’s rhetoric at the press conference mostly judged the government. Lee Myung-bak was mentioned 12 times by name, including four “MBs.” MB, his initials, are used by local media as an abbreviation of his name. The Korea-U.S. free trade agreement was not mentioned once.

On Feb. 8, Han called for the modification of several “poison clauses” of the Korea-U.S. FTA through renegotiation before it takes effect and warned that her party would abolish it through the victory of the general election and the change of power unless there is no renegotiation.

The warning, along with the party’s deliverance of a letter demanding renegotiation of the pact to the U.S. Embassy in Seoul on the same day, triggered a strong counterattack from the Saenuri, which blamed the DUP for flip-flopping on the pact. The 2007 pact was signed under the Roh Moo-hyun administration and the Uri Party, a predecessor of the DUP.

“Han’s press conference is disappointing as it only casts blame for actions from the past instead of providing a vision for the future,” said Hwang Young-cheul, Saenuri’s spokesman.

“The public wants a leader who can offer new vision and promises, not a person who only wants to capitalize on the dissent that resulted from the other party’s failures” he said.

The spokesman also mentioned Han’s criticism of Saenuri interim leader Park Geun-hye saying, “a person sitting next to the driver is not free from legal responsibility for a fatal car accident caused by violent driving,” referring to Park’s role as a senior leader of the ruling party.