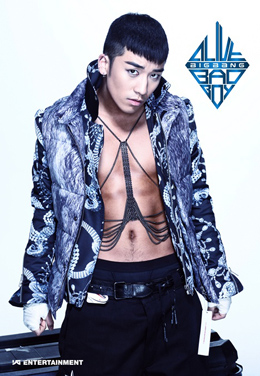 The photo of Seungri was released yesterday on the band’s blog, which has been showcasing images of each band member in succession in advance of the new album release on Feb. 29.

One day earlier, Taeyang shocked netizens with a bare-chested look covered in tattoos, the most prominent being one of a cassette with wings and the word “Alive” clearly visible on top. The singer is also wearing an elaborate chain necklace with a crucifix and an oxygen mask, his hair in half a crew cut. Images of fellow band members Daesung and T.O.P were out in the preceding days.

“In the new album, you will get to experience a side of the boy band members that has never before seen,” a representative from YG Entertainment said.

Big Bang will kick off its world tour in Seoul on March 3 and will then make its way through 16 countries in Asia, the Americas and Europe.