In historic Seochon, hanok is where the art is

In historic Seochon, hanok is where the art is 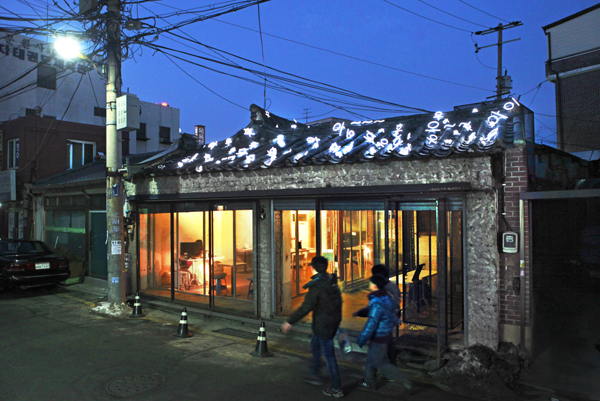 The House of Yi Sang (1910-37), above, in Tongin-dong, central Seoul, is caught in the midst of a traditional neighborhood’s dilemma over whether to preserve the hanok (traditional Korean house), or replace it with a new memorial building dedicated to the writer. By Park Sang-moon

Seochon, a small town stretching from the west wing of Gyeongbok Palace to the base of Mt. Inwangand, is home to some 600 of Seoul’s remaining hanok, or traditional Korean homes. Its alleys are too narrow for cars to pass through, its shops still reliant on hand-written signs for advertisements.

Unlike Bukchon and Samcheong-dong - traditional villages that have, despite preservation efforts, experienced an influx of franchises and tourist shops - Seochon looks and feels like an authentic early 20th-century neighborhood.

But residents now find themselves at a crossroads, stuck between the allure of redevelopment and the importance of preserving one the capital’s remaining symbols of modern Korean history.

As some property owners demolish 100-year-old buildings to cash in on their valuable real estate, others have taken to the streets in hopes of saving what remains. 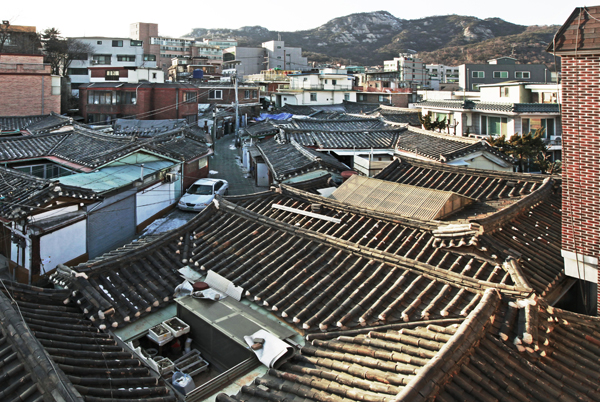 Seochon, located west of Gyeongbok Palace, is a small neighborhood with some 600 of Seoul’s remaining hanok, most of which date back to 1910.

Seochon differs from other hanok villages in that it was a middle-class neighborhood where renowned artists and scholars resided.

Joseon-era landscape painter Jeong Seon (1676-1759) and scholar Kim Jeong-hui (1786-1856) once lived in the village, and a century later famed Lee Joong-seop (1916-56), one of Korea’s most celebrated painters, would walk through the same winding alleys.

Poets Yun Dong-ju (1917-45), No Cheon-myeong (1912-57) and Yi Sang (1910-37), known for their innovations in modern Korean literature and resistance poetry during Japanese colonization, lived in Seochon as well.

The Seoul Metropolitan Government announced in 2010 a plan to turn Seochon into a historical and cultural district by constructing museums and memorial places dedicated to the intelligentsia.

But these efforts haven’t prevented an area that once produced and inspired the artists from experiencing the trickling in of Caffe Benes and souvenir shops.

In fact, after the city maintenance plan was announced, rental prices soared - a boon for property owners now eager to lease the land.

As these landowners are finding out, there are benefits to the redevelopment of the area.

But others are voicing concern that commercialization will erase a long-held identity and turn Seochon into the next Samcheong-dong.

The House of Yi Sang

The controversy surrounding the hanok of Yi Sang, located in Tongin-dong, near the front entrance of Seochon, is a clear exemplification of the town’s dilemma.

Aside from the small sign attached to the top-right front wall that reads “The House of Yi Sang,” the one-story home looks like a typical old hanok in Seochon. But the inconspicuous building is much more than that: Yi, the famed writer, lived on the land for 20 years of his short life.

The home owned by his uncle was demolished after uncle’s death and replaced by the hanok that stands there today. That house will now be replaced with a memorial space for the poet.

Those against the destruction of the hanok say the home itself is valuable because it has been there for nearly 80 years, but the National Trust for Cultural Heritage, which owns this plot, says the hanok is meaningless.

A student of architecture in college, Yi wrote poetry, fiction and essays. He was ahead of his time, and the writer’s works weren’t fully appreciated until after his death.

Yi had a yearning for modernism and wanted to travel to Paris, where his contemporaries, including Ernest Hemingway and F. Scott Fitzgerald resided - but he was trapped under Japanese rule.

He was eventually imprisoned in Japan and died at 27 of tuberculosis.

Many of his works such as “The Wings” and “Crow’s Eye View” are available in English and widely read by Koreans, but traces of his life have been lost to city development projects over the years.

“We often go out to track traces of Yi Sang, but most of them have disappeared,” said Lim Hyung-nam, an architect who used to live in Seochon.

“After his death, his wife Byeon Dong-rim discarded all his possessions as she remarried and we don’t even know where he was buried.

“The site [where the House of Yi Sang is located] is the only thing we have about him.”

The National Trust for Cultural Heritage purchased the house with Kookmin Bank three years ago and the nonprofit organization Arumjigi Foundation has paired up with the NTCH for the reconstruction.

After years of research, a plan to build a two-story memorial space was finalized.

“The basement will be named after the coffee shop Yi Sang operated,” said Shin Ji-hye, an official at Arumjigi as she looked around the current house of Yi, which is temporarily open to the public.

“The first floor will be a multipurpose space. We’ll open it to artists and community groups. On the second floor, there will be a tiny room which we will name ‘the room of Yi Sang.’ That will serve as a memorial space,” Shin added.

Yi’s house was designated a cultural asset in 2004 by the government, but it was later canceled after it was discovered that Yi lived on the land, but not in the house.

The NTCH has also dismissed the importance of the hanok.

“We thought about who Yi Sang was. One of our advisers, Lee O-young [the former culture minister], told us that Yi was a person who always locked himself inside a room,” said Shin.

“When Geum-hong [Yi’s lover] went out to work at a coffee shop, he wrote in a small and dark room. He had no concept of a house. All he needed was a small room and the sky.

“This house also has many illegal additions. Pillars were pulled out and illegal beams were added for more space [by previous owners]. We need to think about the leaky roof and maintenance costs because of poor insulation.

“We want to show them a good example of new buildings that can go well with this neighborhood and preserve the spirit of Yi Sang.”

The Seochon Neighborhood Association, a community group consisting of some 50 local residents, is strongly against the idea.

Robert Fouser, a leader of the association, said he thinks the current building is a perfect match for Yi’s identity.

“Yi Sang was actually a nomad. He was an architect; he ran a coffee shop; he was a poet; he wrote short stories. He worked for the Japanese with a Korean identity. He was a failed businessman. He was as conflicted and confounded as any other Korean during the occupation,” said Fouser, a long-time expat who works as an associate professor of Korean language education at Seoul National University.

“He is a kind of mixed identity. You can think about Yi Sang in that environment because the environment is also mixed up.

“It’s hanok but it’s not really hanok. It reflects the way people have lived here and still live here. It has a sense of history and time. It’s organic to this place. In that sense, the building is perfect.”

“The building attracted attention and became popular and now it’s well liked - so the building has taken on a new life. What I hope we can do is have the Arumjigi and NTCH also see this, and understand that the new life is Yi Sang.”

Fouser said he is concerned that the planned memorial building would impact other valuable old houses that are owned by individual owners, meaning that they could be also destroyed anytime by property owners, decimating Korean heritage and potential tourism.

This concern is shared by Lim, the architect who used to live in Seochon.

“There are many valuable and meaningful old hanok in this area that are not designated as cultural assets,” said Lim, the architect.

“There is an old hanok right in front of the Korea Foundation for Environmental Movements. It had 100 rooms back in the day, but just one now remains. The rest have been turned into cafes and galleries.”

Roh Eun-joo, an architect who used to live in Seochon with Lim, agreed that the memorial was a poor decision.

“Memorial space could be built anywhere in Seoul. The thing is, even if Yi Sang didn’t live there, the building itself is meaningful because it has been there for about 80 years, witnessing all the ups and downs of Korean modern history.”

“Take Pimatgol as an example, getting rid of that place was almost like the Taliban destroying the Bamiyan statues,” said Lim.

Pimatgol, an old and narrow alley of Seoul in Jongno where commoners back in the Joseon Dynasty used to avoid horses, disappeared under a city development plan in 2009.

Most of the small, old restaurants were relocated to a nearby 24-story building.