When you ask, the new Tiguan SUV delivers

When you ask, the new Tiguan SUV delivers 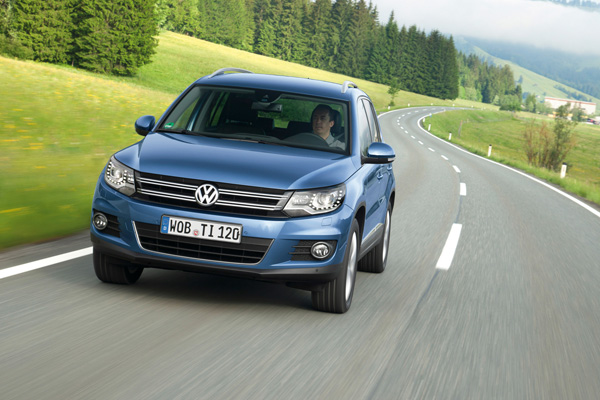 Volkswagen’s new Tiguan, a four-wheel-drive compact SUV, is sleek, quick and fun to drive. Provided by the company

Volkswagen’s second-generation Tiguan, a relatively small sport utility vehicle, stands out from the crowd with its attractive design, which is noticeably sharper and edgier than that of its predecessor.

The car emerged as the best-selling foreign SUV in Korea in January and the No. 7 import overall with 195 units sold.

If the first-generation Tiguan was softer, recognizable by the rounded edges of its lamps and front grille, the sequel looks more modern and sportier, with squarer bi-xenon LED headlights and a chrome-lined front grating. 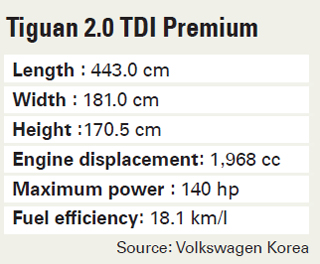 The interior is simple, very much like the Golf hatchback, but spacious for a vehicle of its size. The model I test-drove was all black, with leather seats and a leather-coated steering wheel that was a pleasure to grip.

Since the first version was introduced in 2007, VW has sold over 700,000 units worldwide. The follow-up has also proven popular since it was released in the country last September, with sales buoyed by its modern design, affordability and advanced features that include a parking assist system.

Volkswagen also modified the front of the vehicle to bring it more in line with its recent family look, and has added a “panoramic” sunroof that has been expanded by 300 percent.

It is equipped with a 2.0-liter TDI engine that can produce 140 horsepower and offers high fuel efficiency of 18.1 kilometers (11.2 miles) per liter - making it 21 percent more environmentally friendly than the first Tiguan.

I took the new four-wheel-drive out for a spin and found it very similar to the Golf, which has a similar engine and platform. It was light, quick and nimble enough to make zigzagging through traffic not only effortless but fun, yet still offered enough power and oomph to zoom up steep gradients without much drag. Its compact size also makes it more practical when overtaking on congested roads and parking.

It also proved extremely responsive when cornering and gives new or inexperienced drivers a big hand when parallel parking with its automatic parking assist function.

Like many German cars, the Tiguan comes with a start-stop function that automatically kills the engine when the vehicle comes to a complete stop to reduce the unnecessary consumption of fuel. However, the engine guns back into action immediately as soon as you begin easing your foot off the brake. According to the automaker, this function saves 0.2 liters of fuel for every 100 kilometers driven in urban areas.

Unfortunately, the vehicle I drove did not have satellite navigation installed, so I was unable to gauge how well its locally produced touch screen navigation system functions. The system also comes with a 30-gigabyte hard disk drive complete with data-storing Secure Digital (SD) card slots and Bluetooth capability.

One thing that turned me off the car, however, was its noisy engine. Even though this is often par for the course when driving a diesel, it still proved a source of constant annoyance.