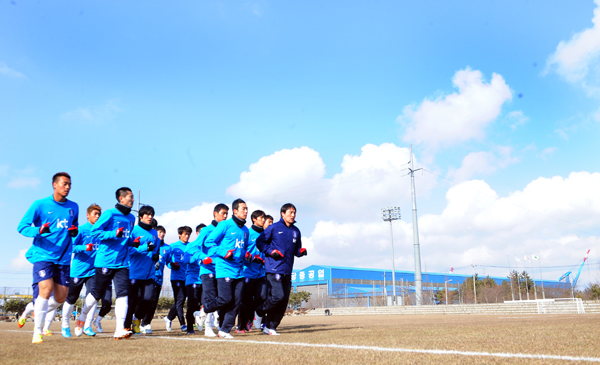 The national team, ranked 34th in FIFA’s February rankings, had their first training session at the Hyundai four seasons football field in Yeongam, South Jeolla. Among the 26-man squad announced on Feb. 10, only Park Chu-young of Arsenal and Ki Sung-yeung of Celtic FC were absent. Jeonbuk Hyundai Motors midfielder Kim Jung-woo was pulled from the squad on Saturday after an ankle injury. Park and Ki are expected to join the team on Feb. 27.

Choi, who took the helm in December, said that he is looking forward to playing against Kuwait. “The atmosphere in our squad is bright and full of energy which is very positive,” Choi said. “We have talented players, so we are going to prepare well.”

Korea currently leads Group B in the third round of Asian qualifiers for the 2014 FIFA World Cup. However, if the team loses to Kuwait, and if Lebanon, which has the same number of points as Korea but is behind on goal difference, beats or draws with the United Arab Emirates, Korea loses its chance to go to an eighth consecutive World Cup.

Choi said he has emphasized to the players that if they relax they will be ready for the pressure of such a big game.

“I didn’t tell players that we are standing on the verge of a cliff in the match against Kuwait,” Choi said. “This training is not only about Kuwait but to figure out how to best use the players we have.”

For his first squad, the former Jeonbuk coach has brought back several veteran K-League players. These players, however, haven’t played a competitive match since last fall, so it is expected that Choi will try to focus these players to find their game rhythm during the training session. The team didn’t have an intensive training session yesterday, instead playing a game among themselves before seeing who could hit the crossbar from the halfway line.

One of the veterans in the squad is striker Lee Dong-gook, who had his best season last year by leading Jeonbuk to the K-League championship and taking the MVP award. Choi, who guided Lee in the past three seasons at Jeonbuk, said he will not ask much from the 32-year-old, only that he perform like he did in the league last season.

“It is true that Lee has under performed for the national team,” Choi said. “But if he performs like he did with Jeonbuk, there won’t be a big problem.”

“I was thinking that we need a leader from the defensive line,” Choi said. “I was deciding between Kwak and Lee Jung-soo [Al Saad], but decided to go with Kwak because he did a good job with Ulsan.”

Kwak said he is honored to be a skipper for the team. The 30-year-old has 21 caps for Korea and four goals. When asked how he feels, the center back emphasized the unity within the team.

“Not just anyone can play for their country. Players need to play with pride and try to have fun too,” Kwak said.

The team is scheduled to train in Yeongam until Thursday before moving to Jeonju, North Jeolla, the next day to prepare for the friendly match against Uzbekistan at Jeonju World Cup Stadium on Saturday.

The Taeguk Warriors then return to the National Football Center in Paju, Gyeonggi, to resume their training.