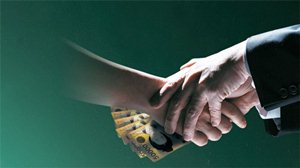 A newly installed, lucrative cash reward is encouraging whistle-blowing of illegal campaign activities as competition among campaigners heats up ahead of the April legislative elections, according to the election watchdog.

On Jan. 20, the Gyeonggi branch of the National Election Commission received a report about an illegal campaign. The tip was sent by a person surnamed Lee, who said he is the chief campaign manager for one of the preliminary candidates for the April 11 general election who was aiming to be a candidate of the largest opposition Democratic United Party in the Anyang, Gyeonggi, constituency.

The tip was given in detail: Lee said that the preliminary candidate ordered him to give 2.5 million won ($2,220) to 3 million won, from the candidate’s wallet, to a reporter of a local newspaper for a front-page article that included a public opinion survey in favor of him.

“I overheard A saying that a reporter with a local paper agreed to publish an article for a price reduced by 500,000 won from the initial 2.5 million won,” Lee said.

He was also ordered to pay cash to residents in the region who joined the DUP. Lee said even the preliminary candidate paid him 8 million won in reward in December for creating an election campaign for him. Lee said he was also promised additional compensation if the preliminary candidate becomes a lawmaker, including becoming his chief secretary and receiving seed money for his own business.

“When the Grand National Party suffers, the victory is guaranteed with the banner of the Democratic Party,” Lee quoted the candidate-hopeful as saying to him. “It will be done with the spending of just 200 million won to 300 million won for two or so months before the nomination is completed. I will give you as much as you want, so spend as much as needed to gather the votes.”

The candidate hopeful is denying his charges, but if they turn out to be true, Lee will receive compensation of at least 100 million won, according to a NEC official.

The preliminary candidate approached Lee, who was known to have a wide network in the region, and offered him the job of his chief campaign manager late last year, Lee said. Lee claimed that he did not know about the new NEC rule and reported the illegality with pure mind. But, NEC officials said that the new rule will work as an incentive in the election season to help weed out illegal activity. 